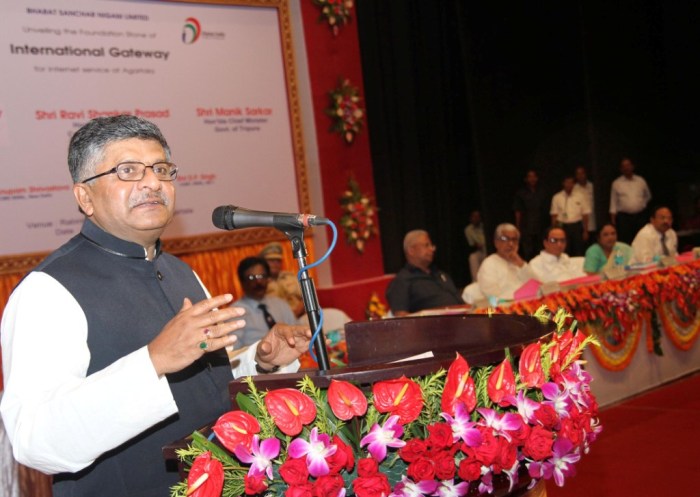 The government has asked telecom service providers to install new towers to deal with the problem of call drops and improve quality of service (QoS), union Minister Ravi Shankar Prasad said on Wednesday, adding that the problem was a “legacy” of the previous Congress government.

“The Congress has demanded my resignation. I have certain questions for them. Under 10 years of Congress rule, the Sanchar Bhawan was unfortunately known for all the wrong reasons,” the communications and information technology minister told reporters here.

“It had become an example of corruption, loot and gross impropriety, where honest opinion of good officers was ignored. 2G and other scams took place under the Congress rule,” he said.

“Call drops is also a legacy of the Congress government,” he added.

The minister’s statement came a day after the opposition party demanded Prasad’s resignation over the call drop issue.

“I have asked telecom service providers to install new towers to improve the quality of service. The final decision on call drops will be taken after getting the views of TRAI (Telecom Regulatory Authority of India),” Prasad said.

The government has been taking proactive measures to address the issue of call drops since April, with the telecom secretary holding a meeting of all operators and directing them to improve services.

Prasad has already written to chief ministers to permit installation of telecom towers on state government buildings also, as has been done by the Kerala government.

Earlier, the central government conducted a special audit of cell phone towers and said that of the 34,600 such towers operating poorly, about 16,962 had improved their performance while the rest were in the process of doing so.

Pointing out that the telecom service quality of all operators was being monitored on a weekly to 10-day basis, a Department of Telecom statement on Monday said: “A special audit was done in the entire country to adjudge their performance.”