Telenor Group has revealed how its business improved performance in several key telecom markets in Europe and Asia during the third quarter of 2019. 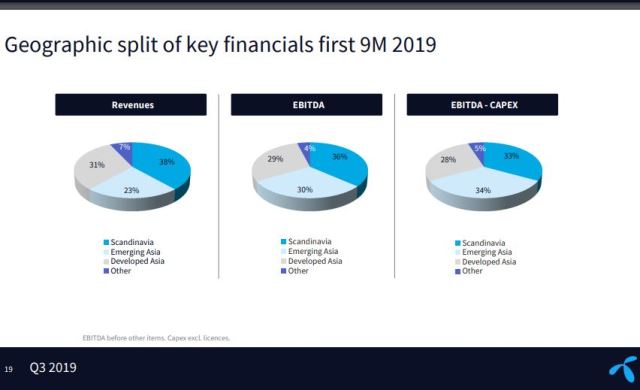 Telenor Norway achieved 25 percent growth in fibre revenues. Lower handset and other hardware sales were the main drivers for a decrease in total revenues of 3 percent. Opex decreased 5 percent, mainly from lower sales and operations costs.

Telenor Sweden added 9,000 high-speed fixed internet subscriptions in the quarter taking the total to 628,000. EBITDA declined 4 percent as the Opex reduction resulting from lower personnel, consultancy and maintenance costs could not offset the decline in subscription and traffic revenues and lower handset margin.

Capex increased by 10 percent, with investments this quarter being primarily related to IT modernisation and capacity upgrades.

Telenor Denmark achieved 6 percent lower operating expenses due to focus on improvement in efficiency. The mobile subscription base ended at 1.7 million, which is 5 percent lower than a year ago. The smaller subscriber base in combination with 3 percent lower ARPU explains the revenue decline of 8 percent.

Telenor has acquired 54 percent of the shares in DNA from Finda and PHP, and further increased its ownership to 97.96 percent following the initial mandatory tender offer that ended 10 October.

Gross profit increased by 5 percent driven mainly by higher mobile subscription and traffic revenues. EBITDA decreased slightly, as the increased gross profit was more than offset by non-recurring costs related to the ownership change, in addition to increased sales and marketing cost.

dtac – Thailand achieved 2 percent growth in subscription and traffic revenues in September and stable for the full quarter. The effort to strengthen network and customer experience yielded results, with network NPS improving and fewer customer complaints.

Digi Malaysia faced 1 percent dip in subscription and traffic revenues due to reduction in prepaid voice.

Grameenphone Bangladesh’s subscription and traffic revenues increased 7 percent during the third quarter. The subscription base increased by 0.4 million to 75.7 million, which is 6 percent higher than last year.

EBITDA of Grameenphone Bangladesh increased 5 percent driven by revenue growth and a healthy opex development despite pressure on commissions and regulatory costs. On 22 July, the Bangladesh Telecommunication Regulatory Commission (BTRC) imposed further restrictions on importing telecom equipment and software as well as tariff approvals. This has delayed the roll-out plan in Bangladesh and resulted in lower Capex.

Telenor Pakistan’s revenue from subscription and traffic fell 15 percent and EBITDA dropped 50 percent. The negative revenue was mainly caused by the disallowance of the service fee in the second quarter, but also lower ARPU.

Increased energy prices, network expansion and the devaluation of the local currency led to 8 percent higher Opex. Mobile subscriber base increased by 0.5 million, and the subscription base is now at a level which is 3 percent higher than last year.

Telenor Pakistan’s GSM license expired on 25 May, and the renewal fee was set to USD 449 million by Pakistan Telecommunication Authority (PTA). We claim that the renewal price should be USD 291 million, which is the same as prior renewals for other operators.

Telenor Myanmar added 1.8 million mobile phone customers during the quarter, taking the subscription base to 21.6 million. 60 percent of the customers are now active data users, with an average data consumption of 3.5 GB per month.

A 20 percent increase in the subscription base resulted in a subscription and traffic revenue growth of 2 percent.

Telenor Myanmar’s Capex was mainly related to the 4G network, site equipment and IT to support the growing business. 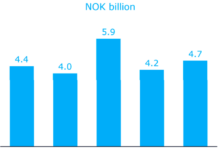