Telenor today announced an increase in revenue, drop in EBITDA, cut in Opex, and increase in Capex during the first quarter of 2019. 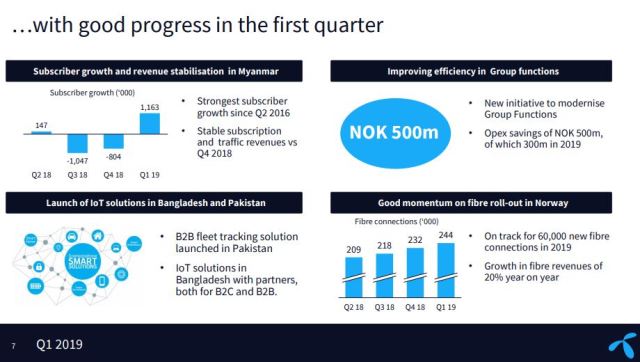 Telenor has generated 38 percent of the total revenue from Scandinavia, 24 percent from Emerging Asia, 31 percent from Developed Asia and the balance 7 percent Other locations.

Telenor said its Capex excluding licences and spectrum is expected to be NOK 16-17 billion, including the operation in Thailand.

Telenor achieved Opex reduction of NOK 72 million in Salaries and Personnel and NOK 44 million in Sales, Marketing and Commissions and NOK 109 million in other Opex areas in the first quarter. Telenor’s Opex rose by NOK 6 million in operation and maintenance, NOK 101 million in energy and NOK 7 million in site rental.

Telenor launched its B2B fleet tracking solution in Pakistan and introduced IoT solutions in Bangladesh with partners, both for B2C and B2B.