Australian consumers have started paying more for their mobile phone plans after recent price increases by Telstra, Optus and Vodafone, new analysis by the ACCC has found.

Telstra, Optus and Vodafone collectively hold 87 percent of the total retail mobile phone market, and have more than 95 percent of the post-paid market.

ACCC Chair Rod Sims said: “The behaviour of the three big telcos would suggest they are not concerned about losing customers to rivals.”

During the past 12 months, Telstra increased its post-paid mobile plan prices by between $5 and $15 per month.

Telstra has reduced the recharge expiry on 35 and 42 day pre-paid plans to 28 days, which effectively equates to a price increase of between 25 percent and 50 percent over a year.

In May, Optus raised the price of all of its post-paid plans by $6 per month, which is an increase of between 8 percent and 15 percent. There has been no increase, however, in the cost of Optus’s pre-paid plans.

Vodafone’s post-paid plans have also gone up by between $5 and $40 a month, however, the increases are currently accompanied by heavy discounting and temporary bonus inclusions.

In December 2020, Vodafone’s pre-paid plans that previously featured a 35 day expiry reduced to a 28 day expiry for the same monthly cost. Over a year, this effectively equates to a 25 per cent price increase.

These mobile price increases follow the merger of TPG and Vodafone in 2020.

Telstra, Optus and Vodafone customers could save between $5 and $25 per month, and possibly more, by moving to a different provider with comparable data inclusions.

In light of Telstra, Optus and Vodafone offsetting recent price increases with higher data allowances, the ACCC also encourages consumers to check how much data they typically use and choose a plan that covers only the data they need.

According to data released as part of the ACCC’s latest Internet Activity Report, the average mobile phone user in Australia consumes less than 15 GB of data per month.

Plans that include at least 15 GB of data, as well as unlimited national calls and texts, can be found for as little as $25 per month. 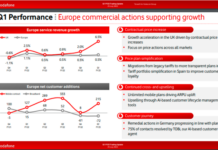