TRAI has recommended a reserve price of Rs.3,104 crore per megahertz for CDMA or 800 MHz band, which is 15 percent higher than the rate it had proposed in February.

In its February recommendation, the Telecom Regulatory Authority of India (TRAI) had proposed a reserve price of Rs.2,685 crore per megahertz for 800 Mhz.

The TRAI reiterated its recommendation that the entire available spectrum with the department of telecom (DoT) in the CDMA band should be put to auction, including unused part with BSNL and MTNL. 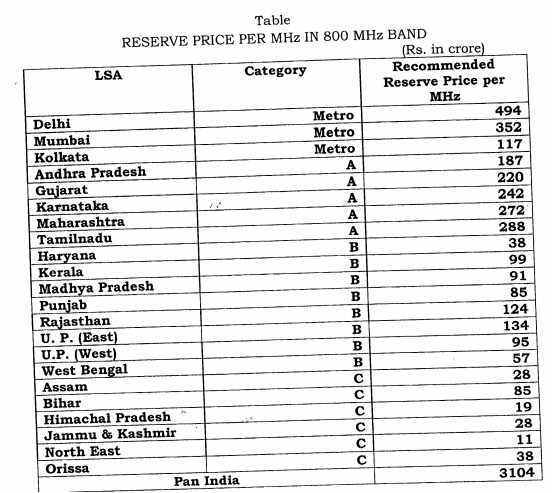 As the public sector undertakings Bharat Sanchar Nigam (BSNL) and Mahanagar Telephone Nigam (MTNL) are not using the spectrum in the 800 MHz band, the TRAI has, therefore, recommended: “The DoT should take back from MTNL its entire spectrum holding in the 800 MHz band.”

“BSNL should be allowed to retain only the CDMA carrier in all the LSAs (licensed service area) except in Jammu and Kashmir, Assam and northeast, where it can retain both the carriers. The DoT should take back other carriers assigned to BSNL in the 800 MHz band,” it added.

The TRAI recommended the reserve price in the 800 MHz band to the DoT Feb 22. The DoT Nov 14 sought clarifications on the recommendations.

The recommendations said chances of participation by a prospective new bidder will be more if it offered contiguous 5 MHz of spectrum.

“At least one chunk of contiguous 5 MHz spectrum (that is four carriers) should be carved out before the auction. New entrants must be assigned the earmarked contiguous carriers only,” the sector regulator added.