“To build on our loyal customer base and the third-party recognition we have received for network leadership, we extended our wireless and fiber network capabilities, began offering an unlimited pricing option and expanded our opportunities in new markets,” Verizon Communications CEO Lowell McAdam said.

Wireless revenues of Verizon was $20.9 billion (–5.1 percent) due to decreased overage revenue, lower postpaid customers in the quarter and continued promotional activity.

Verizon plans to launch 11 pre-commercial 5G fixed wireless pilots during the second-quarter of 2017.

Block Institute, the State of Connecticut, Georgetown University, HRC ManorCare and Xplor are the latest clients for Verizon Enterprise Solutions. 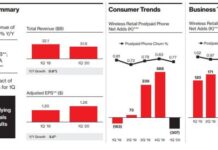