Verizon Communications said it will be slashing about 7 percent, or about 800 jobs, at its struggling media unit Oath. 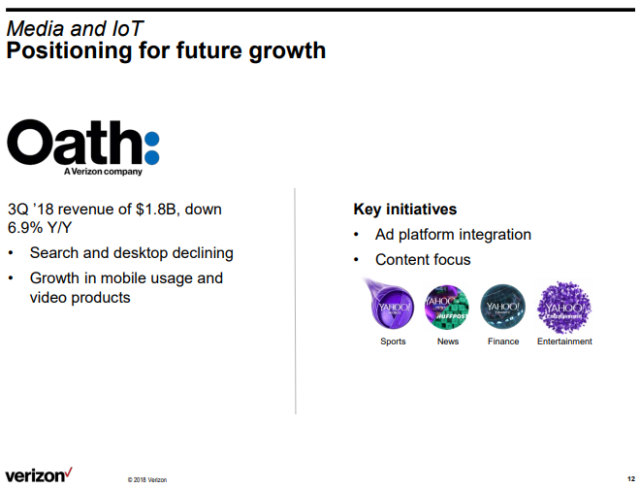 Verizon said on Wednesday that the job cut is in addition to a voluntary separation program announced by the telecom operator in December last year that will see 10,400 employees leave by the middle of 2019.

Verizon Media, formerly called Oath and home to its Yahoo and AOL divisions, had 11,385 employees at end of 2018.

The unit has struggled to improve Verizon’s digital advertising business, which competes with Facebook and Google for advertisement.

Verizon’s media business posted revenues of $1.8 billion in third-quarter 2018, showing 6.9 percent drop. The company expects Oath revenues to be relatively flat in the near term and does not expect to meet the previous target of $10 billion in Oath revenues by 2020.

Verizon earlier said it will achieve $10 billion in total cash savings by 2021. This initiative includes zero-based budgeting, which has yielded approximately $1.3 billion of cumulative cash savings on a year-to-date basis, and its Voluntary Separation Program.

The focus of Verizon in 2019, under the new CEO Hans Vestberg, will be on the expansion of 5G network across the US. Verizon’s spending towards Capex had reached $12 billion in the first three months of 2018. Verizon is not increasing its capital spending for the purpose of 5G since it will rely on existing fiber and other assets.