Vodafone Idea has appointed Bank of America and Morgan Stanley to sell its fiber business in order to reduce debt, Bloomberg reported.

Mumbai-based Vodafone Idea is in the process of transferring all of its fiber assets into a separate company. The unit has about 158,000 kilometers (98,177 miles) of fiber. Vodafone Idea’s fiber assets could be valued at as much as Rs 13,000 crore or $1.9 billion.

The bankers will initiate discussions with potential buyers for the fiber assets. A decision is yet to be made on the valuation and the stake to be sold.

Vodafone Idea in April raised Rs 25,000 crore from a rights issue, building a war chest as India readies for a 5G network.

Vodafone Idea, which was formed by the merger of Vodafone Group’s India business unit with Kumar Mangalam Birla’s Idea Cellular, has reported losses in every quarter since the deal was announced in 2017.

Both Bharti Airtel and Vodafone Idea top the list of Asian peers with highest borrowings, according to data compiled by Bloomberg. 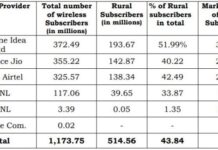