Vodafone Idea’s revenue share based on adjusted gross revenue (AGR) has slipped to 28.1 percent in the April-June quarter of 2019. 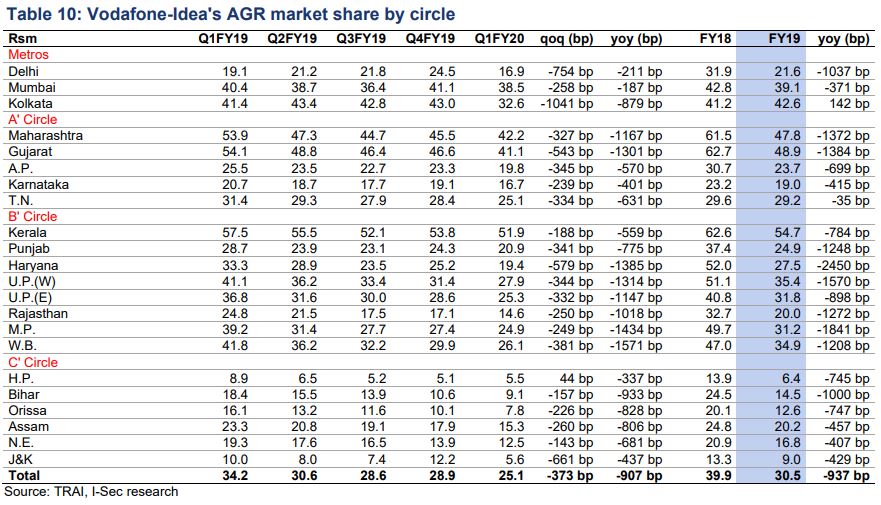 Reliance Jio, promoted by billionaire Mukesh Ambani, has 31.7 percent AGR market share in India. Bharti Airtel has retained its revenue market share of about 30 percent, according to a report from ICICI Securities.

Bharti Airtel, according to a report from Goldman Sachs, will be overtaking Vodafone Idea in terms of mobile subscribers as well. Vodafone Idea is likely to downsize its operations in less profitable areas due to cash crunch.

Airtel’s AGR rose 0.9 percent — first time after Q4FY17 — to Rs 103 billion; and its market share was stable at 30 percent vs Q3FY19. Bharti’s AGR growth in traditional 1,800MHz circles, which were dominated by Vodafone and Idea, grew 17.9 percent, while 900MHz circles dominated by Airtel grew 8.1 percent, according to ICICI Securities.

Vodafone Idea lost 290bps market share to 31.9 percent in leadership circles, down 345bps to 19.8 percent in established circles and dip 415bps to 14.6 percent in challenger circles.