Vodafone Group revenue declined 2.3 percent to €21.4 billion during the first half of fiscal 2020-21 due to lower revenue from roaming, visitors and handsetsales.

Vodafone could not enhance revenue despite the acquisition of Liberty Global’s assets in Germany and CEE and the launch of 5G business.

Vodafone’s Adjusted EBITDA declined 1.9 percent to €7.0 billion as a decline in revenue was partially offset by good cost control.

Vodafone launched 5G in 127 cities across 9 European markets. Vodafone does not reveal its Capex during the first half of the fiscal.

Vodafone covers 98 percent of the population in the markets its operates in with 4G.

Vodafone TV has over 22 million subscribers in 11 markets. Vodafone consumer IoT offering has now connected over 500,000 devices such as the Apple Watch OneNumber service and our ‘Curve’ mobile tracking device.

Vodacom has 171 million customers in 8 markets and these countries represent 40 percent of Africa’s total Gross Domestic Product. Vodacom is the leading mobile connectivity provider by revenue market share in 7 markets. Excluding Kenya, Vodacom covers 70 percent of the population in the markets in which it operates with 3G mobile services and 60 percent with 4G.

Vodafone is targeting  spectrum in the low, mid and high bands in major Europe markets. This ensures that it does not need to restrict long-term network infrastructure through DSS technology and can invest in building 5G network to provide the backbone for Gigabit networks.

Vodafone Germany’s footprint of 24.1 million households will be upgraded to the latest DOCSIS 3.1 standard to ensure more speed than the incumbent.

Vodafone CEO said the company is beginning a multi-year journey to redefine technology architecture following a Telco as a Service (TaaS) model.

Vodafone’s TaaS model is based on two existing layers of inter-connected digital technology.  Vodafone created a standardised suite of customer and user-facing interfaces for an entire omni-channel. The OnePlatform suite includes the MyVodafone mobile app, browser-based portal, TOBi AI assistant, and the Retail Point of Sale platform that powers physical and digitalstores.

The OnePlatform suite is powered by Digital eXperience Layer (DXL). DXL refers to the abstraction layer. In its IT architecture which separates customer-facing micro-services requiring frequent and rapid adjustment, such as prepaid top-ups or customer onboarding, from heavier back-end systems such as billing and CRM. The platform uses common software, with open-source components and standardised APIs to enable easy integration and interconnection.

The connectivity value chain involves a high degree of repeatable processes across all of markets, such as procurement, network deployment, network operations,sales activities, customersupport operations, and billing and transaction processing.

This has provided Vodafone with a significant opportunity to standardise processes across markets, relocate operationsto lower cost centres of excellence and apply automation atscale. Vodafone has consolidated supplier management function into a single, centralised procurement company.

The Vodafone Procurement Company manages global tenders and establishes standard catalogues which are made available to our local market operations through a unified end-to-end enterprise resource planning (ERP) system.

This allows Vodafone to generate over €600 million in annual savings as compared to standalone operators. Once the equipment is acquired, Vodafone can efficiently manage inventory through Network Stock System and ensure that it minimises time to deployment, including by moving stock across markets as needed.

Vodafone monitors Network Operations for all markets through international centres of excellence that run these processes for the entire Group. Regional Network Operations Centres monitor operations of fixed and mobile networks across geographies following standard protocols that maximise productivity and automation.

As an example, a third of new Network Operations tickets are fully automated. Similar integrations have been executed across IT operations as well as Finance and HR processes. Whenever possible our back office activities are delivered though Shared Service Centres (VOIS) in Egypt, India and Eastern Europe. Over a third of the targeted €1.2 billion net opexsavingsin Europe and Common Functions are being generated through integrating activitiesinto VOIS and driving digitisation at speed.

Approximately 30 percent of the Group’s headcount works in VOIS and shared operations, and in the last two and a half years Vodafone automated over 4,600 roles. Vodafone is continuing to transform the business and evolve the Group digital toolset – including TOBi and Robotic Process Automation – in order to further productivity leadership. 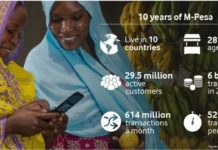