A recent report from Goldman Sachs Global Investment Research indicates that Vodafone Idea is likely to down size its telecom business in India. 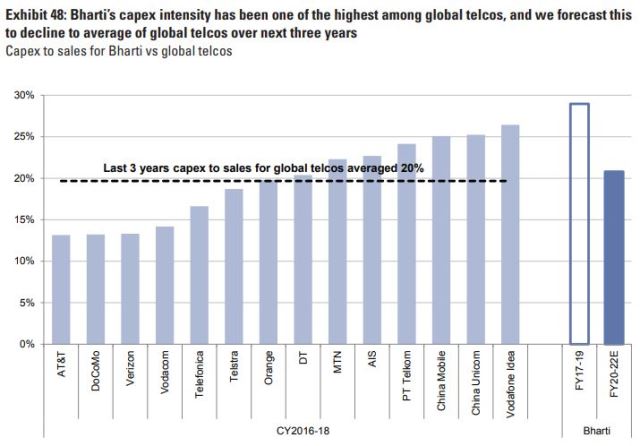 Vodafone Idea has 30 percent revenue market share of the wireless industry in India as of March 2019. Data from telecom regulator TRAI indicates 29 percent of Vodafone Idea’s revenues come from ten service areas where Vodafone Idea is ranked either number 3 or 4 in terms of market share.

Vodafone Idea has 110 million 3G + 4G subscribers as of June 2019. Given the company’s relatively weaker balance sheet and lower Capex vs Bharti Airtel and Reliance Jio, some of its mobile data subscribers could potentially be at risk of churning out.

Vodafone Idea may need to raise capital in four to five quarters, or potentially scale back operations in some service areas. Vodafone Idea’s current cash-burn rate would imply the company’s cash balance could reach very low levels by September 2020.

Vodafone Idea’s intent to monetize fiber assets could provide some more headroom to the company. Vodafone Idea’s underlying EBITDA excluding synergies remains under pressure, and is likely to be further pressured by interconnect revenues going to zero from January 2020.

Vodafone Idea has about Rs 40 billion annual debt repayment obligations over the next two years, and spectrum related payments of about Rs 120 billion in the next 12 months. Vodafone Idea could look to cut back on Capex / Opex, and may streamline its operations to fewer service areas vs 22 at present.

Vodafone Idea will be free cash flow negative for the foreseeable future, with net-debt-to-EBITDA at about 11x even in FY21. This is likely to constrain the company’s ability to make network investments in line with Airtel, and Vodafone Idea’s high-end customer base could be at risk.

Vodafone Idea is likely to fall to third place in overall market share with between 22 to 24 percent of service revenue, Chris Lane and Samuel Chen, analysts at Bernstein, said in their latest research report.