Apple is the new leader in the global smartphone business – beating Samsung for the top position during the fourth quarter of 2020. 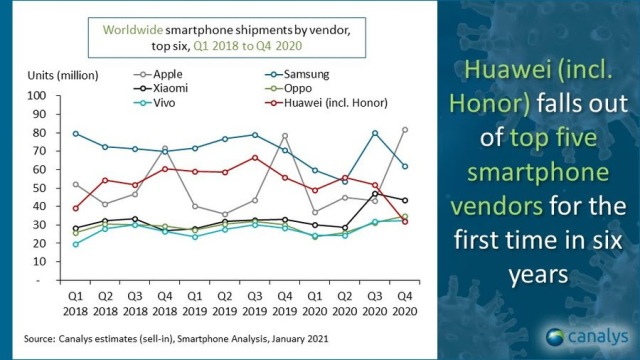 For 2020, Samsung has maintained its top position in the smartphone market, according to research reports from Canalys and IDC.

Worldwide smartphone shipments fell 2 percent to 359.6 million in Q4 2020, according to a Canalys report.

Apple shipped its most iPhones ever in a single quarter, at 81.8 million units, up 4 percent against the previous year.

Xiaomi, Oppo and Vivo completed the top five, with each seeing share gains from a beleaguered Huawei (including Honor).

Huawei (including Honor) came in sixth place in Q4 2020 with 32.0 million smartphones shipped. It marks the first time in six years that it fell outside the global top five smartphone vendors. 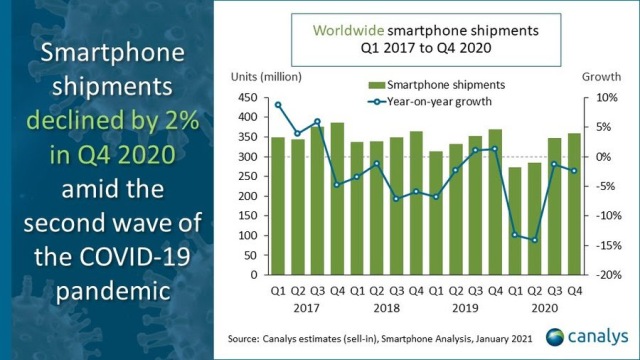 Apple captured the top spot in the global smartphone market for Q4. The pent-up demand for a new 5G iPhone, strong carrier promotions, especially in the US, and the iPhone 11’s longevity are some of the reasons for this growth.

Huawei managed to achieve the No 3 spot for 2020 thanks to its performance in China, which contributed around 70 percent of its total shipments. Huawei’s performance was driven by new 5G models such as the Mate 40 Pro and Nova 7.

The smartphone market achieved 4.3 percent growth in Q4 to 385.9 million, according to data from the International Data Corporation (IDC).

Apple returned to the number 1 position with 90.1 million devices shipped, driven by the success of the iPhone 12 series. This represents the highest shipment volume from a vendor in a single quarter and resulted in 23.4 percent market share and 22.2 percent growth.

Xiaomi finished the quarter in the third position with shipments of 43.3 million and 11.2 percent market share.

OPPO was fourth with shipments of 33.8 million and 8.8 percent market share.

Huawei fell to the number 5 spot with shipments of 32.3 million and 8.4 percent market share. The company continues to suffer under the weight of U.S. sanctions and saw a dramatic year-over-year decline of 42.4 percent.