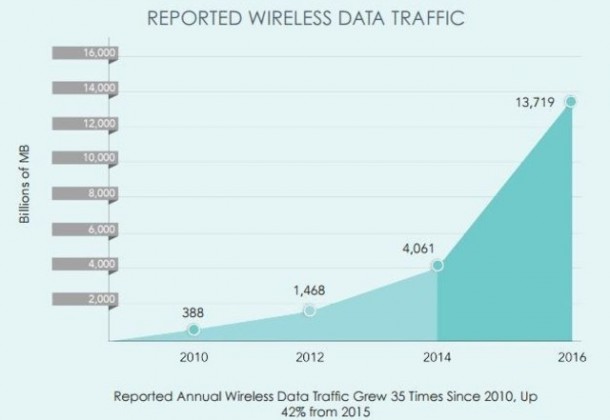 The amount of data traffic sent over US telecom operators’ wireless networks in 2016 was 13.72 trillion MBs (+42.2 percent), said CTIA in its Annual Wireless Industry Survey.

Wireless operators such as Verizon, AT&T, Sprint and T-Mobile US are gaining from the growth in mobile data demands. 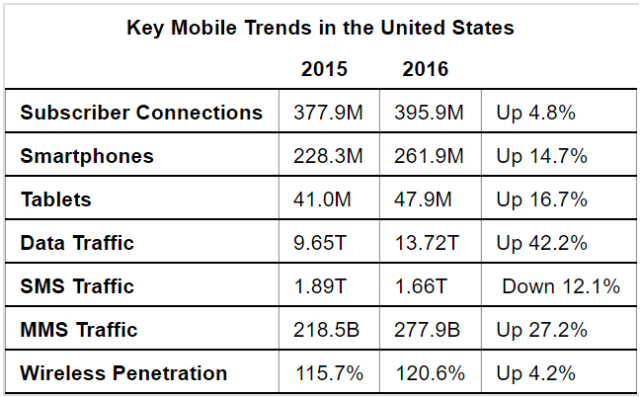 The US telecom market has a wireless penetration of 120.6 percent (+4.2 percent) in 2016. Wireless subscriber base increased 4.8 percent to 395.9 million last year, said the report on Tuesday.

“The growth in mobile data usage underscores the need to free up more spectrum and modernize infrastructure processes at all levels of government to make way for next-generation 5G networks – and hundreds of billions of industry investment,” said Meredith Attwell Baker, president and CEO, CTIA.

America has 309.8 million smartphones and wireless-enabled tablets and laptops on carrier networks – a 238 percent increase since 2010.

With 395.9 million total active devices in the U.S., adoption is now equal to 120.6 percent of the U.S. population, or more than 1.2 wireless devices per American.

Telecom service providers operated 308,334 cells sites in 2016, representing a 57 percent growth over the last decade, thanks to over $26 billion investment in 2016 alone.

Telecoms such as Verizon, AT&T and T-Mobile US are in the process of expanding their LTE coverage, while they are also trying to enter the 5G market in a big way.