Ericsson is the leader in the global Evolved Packet Core market during the second quarter of 2019, Dell’Oro Group said in its Wireless Packet Core quarterly report.

China-based Huawei was the number one EPC vendor in the first quarter of 2019 followed by Ericsson, Cisco, Nokia, and ZTE. The ongoing blacklisting of Huawei by the United States federal government has impacted the company’s market share. Huawei recently said its total revenue will be down by $10 billion in 2019.

EPC revenues rose 13 percent in Q2 2019. The report did not reveal specific revenue of EPC makers. The growth of the EPC market in Q1 2019 was 1 percent. Huawei, Nokia, and ZTE had gained market share during the first quarter. The EPC revenue rose 19 percent during the fourth quarter of 2018.

Mobile operators are expected to make investment in 5G Core deployments in 2020. Telecom service providers will start to expand their 5G coverage by adding 5G standalone base stations that will require the 5G Core.

“We expect to see some 5G Core revenues as early as the first quarter. But the revenues will be small and not significant as service providers build out small markets to learn how to use the 5G Core before rolling out nationwide,” Dave Bolan said.

The Asia Pacific region had the highest EPC revenue growth rate for the quarter accounting for over 40 percent of the revenue.

The trend towards more network function virtualization (NFV) continued accounting for 39 percent of the EPC revenue in the quarter, the report from Dell’Oro Group said. 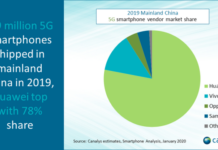