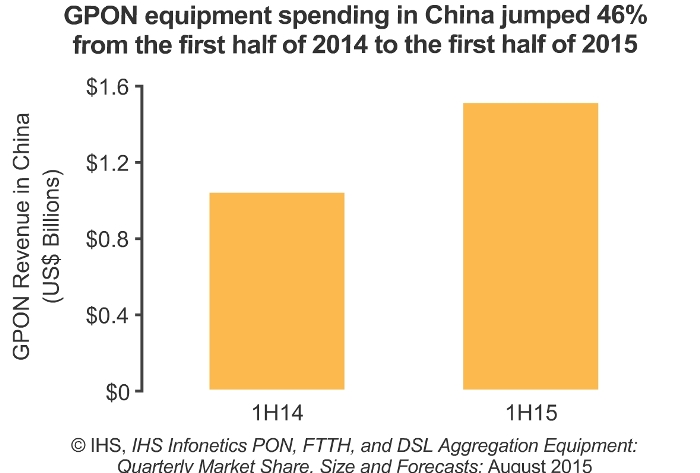 GPON equipment spending in China increased 46 percent in the first half of 2015.

“Telecom service providers realize that fixed broadband services provide some of the highest margins among all their services, so investment levels to expand the speed and capabilities of fixed broadband should remain steady with a continued focus on pushing fiber deeper into access networks and closer to customers,” said Jeff Heynen, research director for broadband access and pay TV at IHS.

Shipments of EPON and GPON equipment in China were to support massive government initiatives to expand the FTTH footprint and service availability throughout the country.

China set a record for PON equipment revenue in 2Q15, surpassing $1 billion in a quarter for the first time ever.

Q2 spending on PON equipment globally rose both sequentially and on a year over-year basis. There will be increased spending for the full-year 2015 as more operators deploy FTTH services.

Due to the tremendous, sustained investment in China, the worldwide broadband aggregation market will reach $9 billion in 2019, said IHS.