The number of light vehicles equipped with Vehicle-to-Everything (V2X) system will reach more than 11.2 million in 2024, representing 12 percent of the light vehicle fleet, according to IHS Markit. 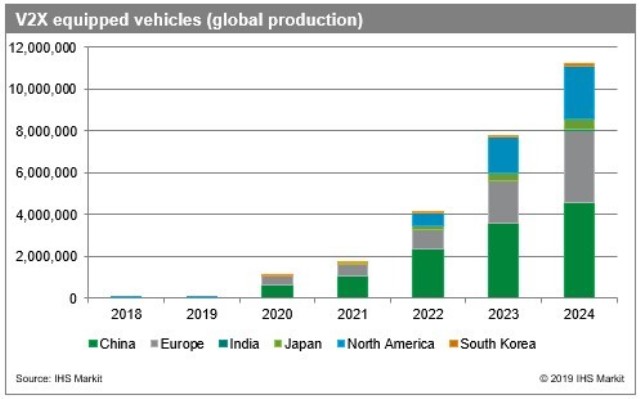 The production of light vehicles equipped with V2X systems will be just under 15,000 units in 2019 and will grow at a compound annual growth rate (CAGR) of 277.5 percent in 2024, the report on automotive telematics said.

The investment in V2X is expected to revolutionize the transportation system and there will be a boom in the automotive telematics segment.

Dedicated short-range communications (DSRC) solutions — as the technology platform for V2X — lead the global automotive V2X market in the near term because top semiconductor companies have already produced chips to power DSRC solutions.

Deployment numbers on the DSRC platform will be relatively low by 2020, according to IHS Markit forecasts. Cellular V2X (C-V2X) solutions will already have surpassed DSRC based solutions, due to expected rapid deployment in China.

China is expected to lead the global V2X market, with 629,000 light vehicles produced in the region equipped with C-V2X technology in 2020 and will maintain the lead till 2024. Europe is expected to be the second largest V2X market but with reliance mostly on DSRC-based solutions and just over 411,000 light vehicles produced during 2020. Europe will produce a significant amount of C-V2X based vehicles by 2023.

“C-V2X is gaining market momentum quickly in most regions and is likely to become the winning technology of choice over time,” Anna Buettner, connected car principal analyst at IHS Markit, said.

The latest vote by the European Commission enables 5G deployment supporting C-V2X in automotive. The US Federal Communications Commission (FCC) has recently delayed a vote to again review a key technology that would pave the way for DSRC in the United States. 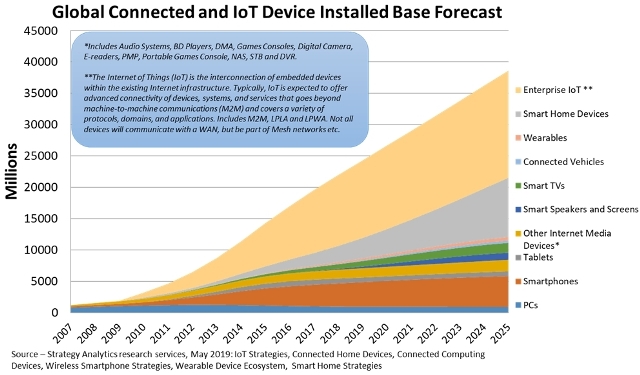 A Strategy Analytics report said the growth in connected vehicles – powered by IoT — will remain positive, but volumes will be modest relative to other segments. The total number of devices connected to the internet reached 22 billion worldwide in 2018.

The IoT revenue opportunity remains uncertain, particularly for service providers, and that companies looking to benefit from the IoT should give most consideration to which target segments, business activities and revenue models they should prioritize.

38.6 billion devices will be connected by 2025, and 50 billion by 2030. Some segments (such as connected computing devices) will see low growth or decline, while others (such as media devices) will continue to expand steadily.