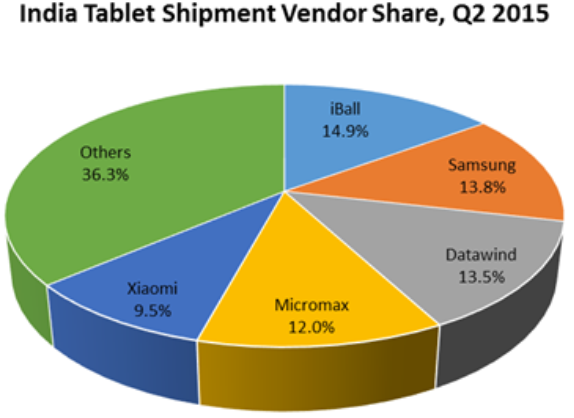 iBall is the new tablet market leader in India, according to IDC. Samsung is number two, Datawind in third position, Micromax the fourth largest tablet vendor, while Apple is out of top five.

iBall has a tablet market share of 14.9 percent against Samsung with 13.8 percent, Datawind with 13.5 percent, Micromax with 12 percent and Xiaomi with 9.5 percent.

iBall benefited from its strong presence in entry level tablets i.e. sub $100 and expansion of retail and geographical reach, said IDC in a statement.

Samsung, the number one smartphone brand in India, dropped to second spot in the local tablet market in Q2 2015 despite posting a healthy double digit growth over previous quarter. Inventory issues in some of their top selling models restricted the overall performance for this brand in Q2, said the telecom analysis report on Wednesday.

Demand in the commercial segment increased 12.4 percent in Q2 2015 against Q1 2015, while the volumes doubled against the same period a year ago.

“However, for tablet market to grow further, consumer demand is vital which is losing sheen as tablet as a category is suffering to justify its use case existence between larger smartphones and notebook PCs,” said Karthik J, senior market analyst of IDC India.

Due to BIS regulation, IDC is expecting lesser tablet shipments in Q3 2015. On a yearly basis, IDC expects the Indian tablet space to post a higher single digit growth in 2015. Consumer market outlook appears to be stagnant but commercial segment is anticipated to witness growth especially through government and education projects.

Nearly 75 percent of tablets sold in India are connected tablets (2G/3G/4G enabled) and 54 percent are 3G enabled owing to limited Wi-Fi hotspots in the country.