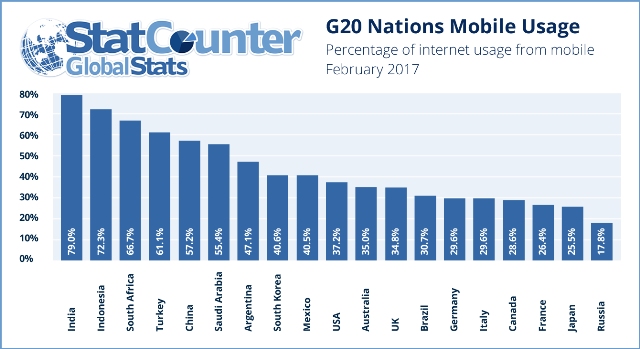 Indians are the world leaders in terms of mobile Internet usage, according to StatCounter, a web analytics company.

79 percent of internet usage was made by Indians through mobiles in February compared to 49.7 percent for the world in general.

Indian mobile usage to surf the internet is more than double that in the UK (34.8 percent) or US (37.2 percent). Of G20 nations, India is the number one user of mobile in terms of internet usage. 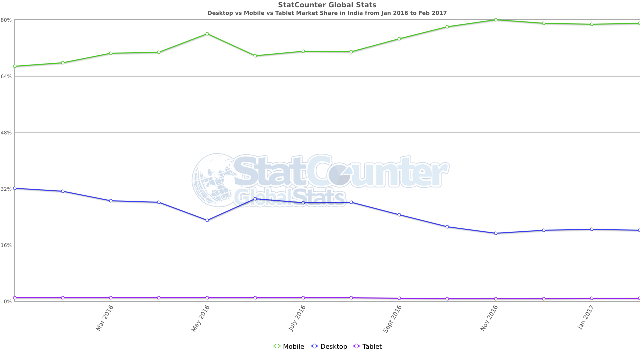 “Internet usage in India by desktop and tablet fell from 33.2 percent in January 2016 to 21 percent this year. Mobile jumped from 66.8 percent to 79 percent over the same time period,” said Tarak Desai of StatCounter.

The entry of Reliance Jio, which has added more than 100 million subscribers on its 4G network in the last six months, was probably one of the reasons for the acceleration in mobile internet usage in India.

The most popular browser in India in terms of internet usage according to StatCounter is UC Browser (43.3 percent) followed by Chrome (36.1 percent). This compares to worldwide, where Chrome (52.4 percent) leads the way followed by Safari (14.4 percent).

Norway and Singapore lead in mobile and fixed broadband speeds

How to spot an unsafe website in 5 simple steps