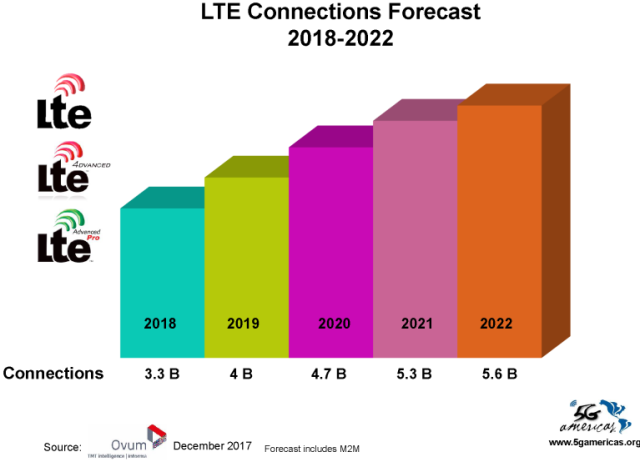 LTE connections are forecast to surpass 3 billion by the middle of 2018, achieve 4 billion in 2019 and pass 5 billion in 2021 from 2.8 billion in 2017, according to the latest statistics report from 5G Americas.

“Oceania, Eastern and Southeastern Asia plays a significant role, accounting for 41 percent of all LTE subscribers by 2022, compared to 32 percent of all cellular subscribers worldwide,” said Kristin Paulin, senior analyst at Ovum.

LTE share vs other mobile technologies
# 74% in North America
# 56% in Oceania, Eastern and South Eastern Asia
# 44% in Western Europe
# 29% in Latin America and the Caribbean

Chris Pearson, president of 5G Americas, said: “LTE will continue to grow until 2022, when we will begin to see some substantial uptake in 5G connections.”

In addition to having a significantly higher penetration rate, the U.S. and Canada also have the highest market share for LTE in comparison to all mobile wireless technologies with 74 percent.