116 operators or around 30 percent telecom operators are investing in LTE-Advanced network. 64 operators have commercially launched LTE-Advanced service in 39 countries. 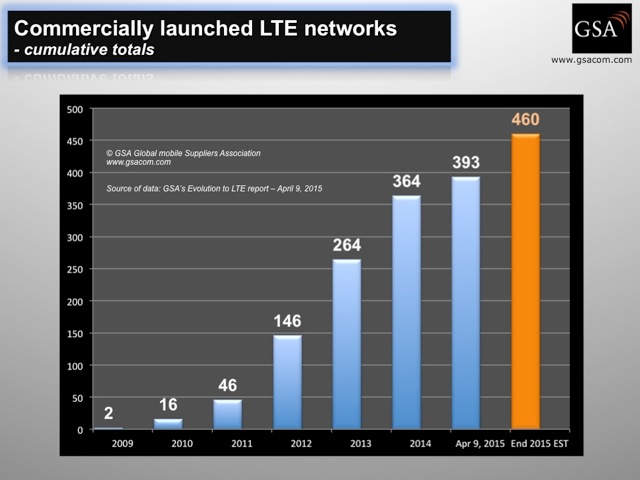 14 operators have launched HD voice service enabled by VoLTE in 7 countries, compared to only 3 launched in March 2014.

“Many more VoLTE launches will happen in 2015,” said Alan Hadden, VP of Research, GSA: “Interest in VoLTE has surged and over twice as many operators are investing in VoLTE compared to a year ago.”

The most widely used spectrum for LTE network deployments continues to be 1800 MHz (3GPP band 3). 176 LTE1800 networks, almost 50 percent higher than a year ago, are commercially launched in 86 countries. 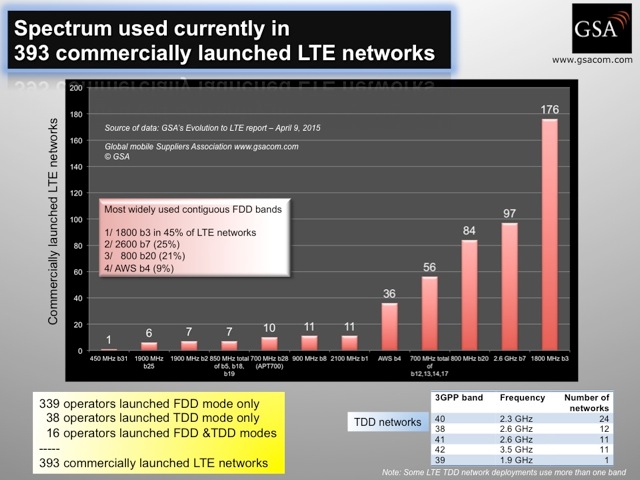 1800 MHz is used today in 45 percent of LTE network deployments and continues to dominate the user devices ecosystem. Over 43 percent of LTE user terminals can operate in the 1800 MHz band. The next most popular contiguous band for LTE deployments is 2.6 GHz (band 7) and is used in almost 25 percent of networks.

800 MHz (band 20) is by far the most popular sub 1 GHz coverage band choice for LTE and gained share with over 1 in 5 operators globally currently using this spectrum.

While most operators deployed LTE networks in paired spectrum using the FDD mode, the LTE TDD mode (TD-LTE) for operators with unpaired spectrum continues to develop in all regions, and particularly in China.