The European pay TV market rose 0.3 percent to 185 million subscribers during the first quarter of 2018, according to Dataxis. 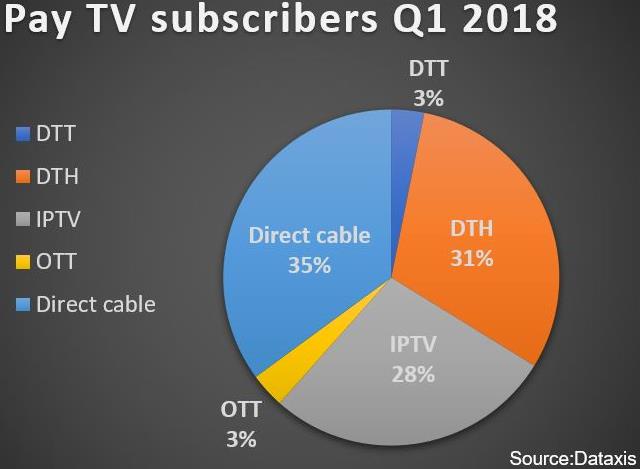 The DTT market lost 0.35 percent of its subscribers, but tends to decline despite the launch of Freenet in Germany in 2017, which accounts for 18 percent of the DTT subscribers and gained 47,000 customers.

IPTV market in Europe added 1,000,000 subscribers or +2 percent compared to Q4 2017. The main players in the IPTV market are Orange France and Rostelecom Russia, which account for respectively 10 percent and 13 percent of the IPTV subscribers.

Despite representing only 3 percent of the pay TV market, OTT grew significantly in terms of subscribers, especially when compared to Q4 2016 (+47 percent). Play Now Poland holds 25 percent of the total OTT subscribers.

Competition from OTT services is significant in developed markets where the pay TV market is mature. North America’s traditional pay TV services lost more than 3 million subscribers in 2017 mainly due to customers switching from satellite, cable, or IPTV services to video streaming services.

“OTT is becoming a preferred video viewing platform due to its low-cost and availability on multiple devices without a long-term contract requirement,” said Khin Sandi Lynn, industry analyst at ABI Research.

DirecTV NOW and Dish Network’s Sling are examples of video streaming services provided by pay TV operators. Such services can be accessed through video streaming adapters or mobile devices.

The pay TV market in the Asia-Pacific has grown more than other regions, reaching a total subscriber base of 656 million in 2017, a 7 percent increase. The pay TV market is expected to grow at a higher rate in the developing markets in the years to come, while mature markets such as North America and Europe are likely to see a slight decline or sluggish growth. 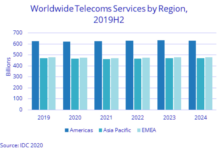 Forecast on spending on telecom and pay TV services: IDC 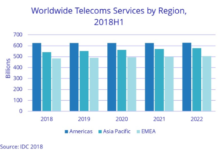 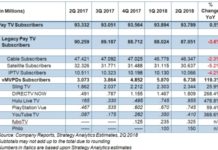 Pay TV subscribers in US — report by Strategy Analytics