SaaS-related revenue will grow to $10.7 billion by 2023 — driven primarily by spending on BSS and led by SPs’ spending on 5G-enabled services, Analysys Mason forecasts. 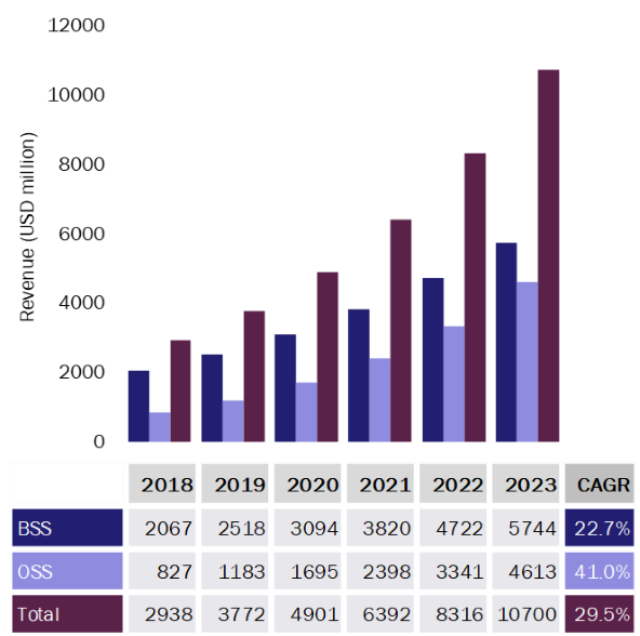 SaaS-related revenue will grow from $2.9 billion in 2018 at a CAGR of 29.5 percent during the 5-year forecast period. SaaS-based delivery will become more-attractive to SPs that are under increasing pressure to reduce their costs and improve their business agility.

The adoption of cloud-based SaaS allows SPs to limit their upfront investment and time to deploy solutions, and to scale more-flexibly in line with demand. SaaS delivery can be especially pertinent to SPs whose investment demands are high, and where investment risk and demand are unclear, such as with 5G network roll-outs and related services.

5G will be a key driver of SaaS-related spending because it will encourage SPs to invest in new services and in assessing new ways of controlling operational costs.

SaaS spending in the BSS market will be driven by spending in business analytics, customer engagement (CE) and revenue assurance. SaaS is expected to account for 27 percent, 22 percent and 21 percent of the overall revenue in each of these three sub-segments, respectively, in 2023.

CE functions are IT-centric and non-mission-critical, so SPs have started to adopt the SaaS model in this sub-segment. SaaS spending in the CE market accounted for more than 50 percent of the total estimated SaaS-spending across all segments in 2019, led by Salesforce.com.

SaaS-related spending in the monetisation platforms (MP) sub-segment will grow steadily, driven by the popularity of cloud-based deployment models in other verticals and by the reduction in the total cost of ownership that SaaS enables.

SaaS will account for 8.6 percent of the total spending in the MP sub-segment in 2023 due to the cautious approach from SPs that lack confidence about the security and customisability of the model and have heavily invested in legacy systems that are still functional and in use.

Within the OSS market, the benefits of the SaaS model will slowly win over SPs that are not currently comfortable with network domain off-premises software applications. SaaS spending in the OSS market will grow at a CAGR of 41 percent, but the growth rates in each of the four OSS sub-segments will vary widely.

SaaS-related revenue in the OSS market will be driven by SPs’ spending on network automation orchestration (NAO) and business analytics (CAGR of 111 percent and 63 percent, respectively, while SaaS adoption in the service design and orchestration (SDO) and automated assurance (AA) sub-segments will be more-limited.

Few SPs in the NAO sub-segment have yet to commit to the SaaS model because of concerns such as a lack of control over network performance and data ownership. Cost benefits and the growing number of vendors that are offering SaaS-based products will drive SaaS revenue to account for nearly16 percent of NAO spending by 2023.

The first cloud-based SaaS applications will focus on analytics, SD-WAN management and orchestration and control plane VNF orchestration. The adoption of SaaS-based delivery will proceed quickly in the network analytics sub-segment because the SaaS model is suitable for training AI-based solutions that require large volumes of data without requiring SPs to build associated infrastructure.

SPs are increasingly accepting the SaaS model due to the cost and agility benefits that it delivers. SPs that want to explore the benefits of the SaaS model should adopt it gradually, and should start by using SaaS for non-critical use cases in order to minimise risks.

The growth in SaaS-related spending will be driven by SPs’ concerns about the potential size and speed of 5G investment growth. Vendors may benefit from the shift towards SaaS because it will improve the efficiency of product delivery and will lead to a more stable revenue stream.