The latest research shows an extremely competitive tablet market where many Android vendors are losing share and revenue due to falling prices and little innovation compelling new consumer sales.

Apple, Huawei, and Microsoft each showed shipment growth in the quarter and combined to take 40 percent market share.

Microsoft shipments of Surface Pro and Surface Book 2 reached over 1 million and could reap even better results next quarter with the release of the Surface Go in a much lower price tier.

Apple is using its market size and brand power to put pressure on its Windows and Android competitors.

“By lowering prices and adding more functionality during every product cycle for the last year, Apple has regained several points of market share and still maintaining a strong ASP due to its Pro and standard iPad mix,” Chirag Upadhyay, Senior Research Analyst, said.

Apple benefited from strong sales of its standard iPad with Apple Pencil support before the back-to-school buying season, which pushed ASPs lower to $410.

Apple iOS shipments grew 1 percent to 11.6 million units in Q2 2018, pushing its market share to 28 percent of the Tablet market.

Android shipments fell to 23.6 million units worldwide in Q2 2018, down 10 percent from 26.4 million a year earlier and 1 percent sequentially. 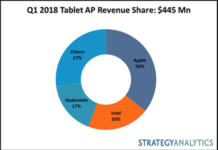 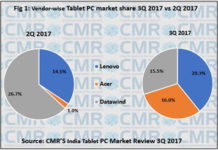 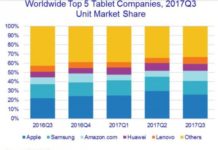