The number of Massive MIMO products has grown significantly, more than doubling in 2019 to over 70 products. 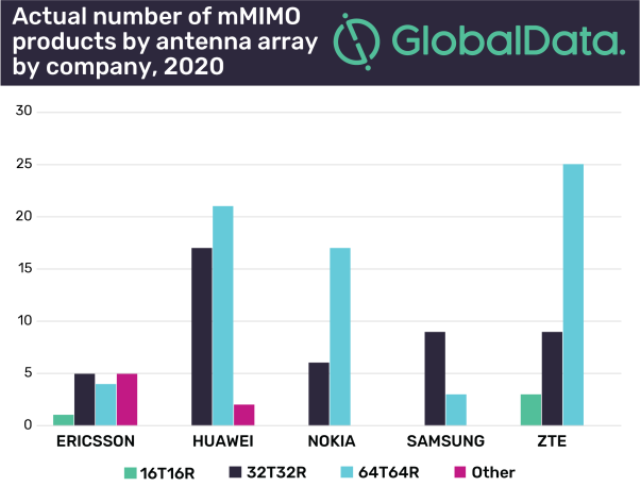 The industry’s five major RAN vendors — Ericsson, Huawei, Nokia, Samsung and ZTE — will offer a total of 127 products supporting LTE, 5G, or both, through the third quarter of 2020.

Ed Gubbins, principal analyst for GlobalData, said: “Demand for Massive MIMO gear among mobile operators globally is being driven by increasing data demands among mobile users in the face of finite spectrum.”

The report said increasing the number of antennas used to transmit and receive signals helps operators meet increasing capacity demands with existing spectrum by focusing mobile signals into beams that target users rather than scattering signals more widely. The result is a more efficient use of the airwaves.

There are multiple criteria that operators use to evaluate Massive MIMO products, including physical size, and maximum power output levels.

The demand for higher performance can also be seen in the fact that more than one vendor that offered a lower capacity product, with just 16 antenna pairs, discontinued sales of those products in 2019 due to insufficient demand, according to GlobalData.

Mobile operator preferences for different types of Massive MIMO gear vary by geography. In South Korea, operators have tended toward using more 32×32 products, because sites in the densely populated cities there are relatively close together, so more powerful 64×64 products might be overkill or even interfere with one another.

However, in China, where there’s less density and a lot of fiber to deliver capacity, operators gravitate toward 64TR products.

These regional preferences are reflected to a degree in vendors’ portfolios. Samsung, which dominates the Massive MIMO market in its home country of South Korea, offers more 32×32 products – preferred by South Korean operators — than 64×64.

Huawei and ZTE, which dominate the Chinese market, offer more 64×64 products, in accordance with the preferences of Chinese operators. Nearly all of Huawei’s Massive MIMO shipments are high-capacity 64×64 products.