There was a dip in telecom investments into wireless and IT infrastructure.

Cumulative Capex for the first half of the year was KRW 919.9 billion with 34 percent implementation rate against the Capex guidance of KRW 2.7 trillion. 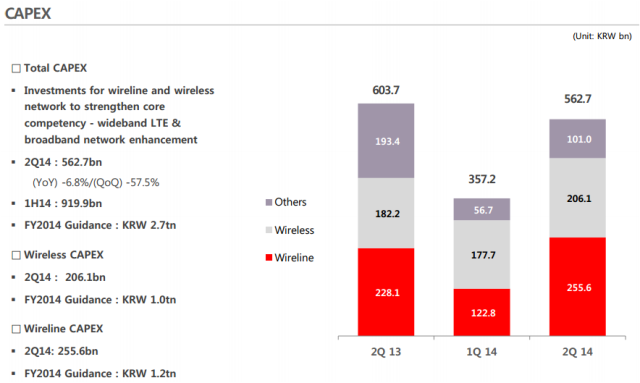 KT, which competes with SK Telecom, said it posted net loss of 757.2 billion won ($738 million) in the April-June period against a net profit of 133.3 billion won a year ago.

The net loss was due to falling returns from its traditional fixed-line business and expenditures from its restructuring program in April.

The company also posted a net loss of 40.9 billion won in the first quarter. 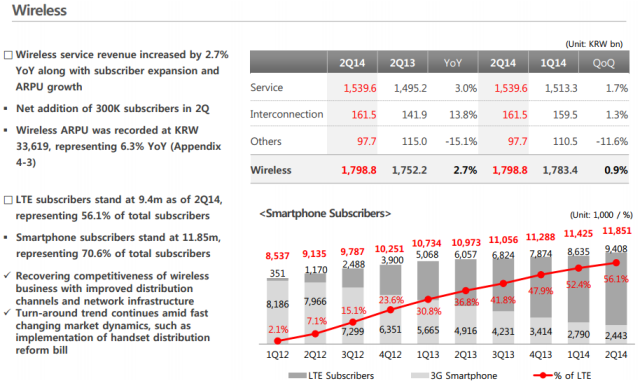 SK Telecom accounted for 50.1 percent of the local mobile market at end-June, trailed by KT with 30.13 percent and LG Uplus with 19.77 percent, according to a data compiled by the Ministry of Science, ICT and Future Planning.

KT said its mobile division revenue rose 2.7 percent to 1.79 trillion won, helped by an increase in the number of LTE service users, which accounted for 56.1 percent of its combined mobile subscribers.

Fixed line revenue declined 6.6 percent on declines of telephony subscribers and traffic. “We plan to make up for the fall in fixed line revenue through maximizing competitiveness of our bundled products while continuing to solidify broadband subscriber base,” said KT officials.

Media / Contents revenue recorded a growth of 13.8 percent to KRW 381.3 billion on sustained growth of subscribers.

KT IPTV acquired 210,000 net additions in Q2, securing a subscriber base of 5.37 million subscribers, continuously solidifying its leadership in this market.

IPTV business seeks to reach over 800,000 net additions this year.

The company said the Handset Subsidy Reform Act will have an impact of stabilizing the market.

Meanwhile, rating agency Moody’s in February 2014 said it expects KT’s consolidated revenue to remain almost flat or even decrease slightly in the coming two years, given declining revenue from the fixed-line business, the expected slowdown in revenue growth in the mobile, media and content businesses, as well as declines in handset sales.