Telstra CEO Andrew Penn said internal testing of the technology had begun and work was underway to roll out trial mobile sites in selected areas ahead of an expected auction of mmWave spectrum in 2021.

“mmWave will supercharge 5G. Its higher capacity and the potential to deliver even faster speeds as well as lower latency will help power the next generation of devices and innovations,” Andrew Penn said.

mmWave is higher frequency spectrum with the potential to deliver even higher 5G speeds and capacity as well low latency. 26 GHz will be the first mmWave band to be used for mobile services in Australia.

Telstra customers’ early access to 5G technology will be in selected areas initially. It will be made possible through ACMA 26 GHz scientific licenses that can be used for trials ahead of the spectrum auction early next year.

26GHz is set to become one of the most prevalent spectrum bands for mmWave 5G in the world, including Europe and Asia.

Telstra has rolled out 5G network coverage to selected areas in 32 major and regional cities. It aims to deliver 5G into 35 cities by mid-year. “More than 4 million people pass through our 5G footprint,” Andrew Penn said.

Average download speeds have increased from 200 megabits to 304 megabits per second now. Telstra also recorded about 1.9 gigabit in the live network. Data usage on 5G network has increased more than 28x in the first half. 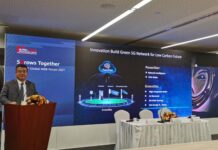