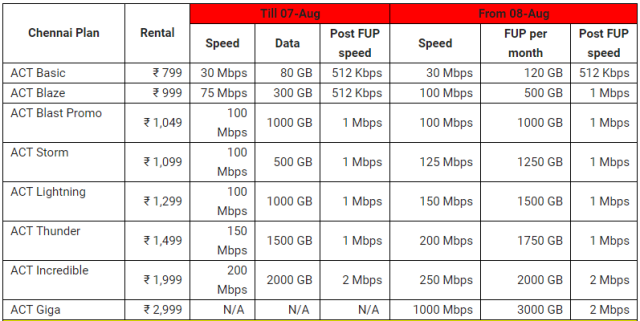 The expansion to Chennai comes at a time when Reliance Jio is getting ready to launch its cost effective fiber broadband plans across India.

ACT Fibernet has packed the Giga broadband plan for INR 2999.

ACT Fibernet is offering one month free subscription on six months Giga plan and free two months subscription for 12 months plan. Customers will have to pay one-time installation fees of INR 2000 to upgrade to GIGA plans.

ACT Fibernet has also upgraded the existing fixed term broadband plans for retail, SOHO and SME from 8 August 2018 without any additional cost.

The company has upgraded ACT Basic to 120 GB FUP limit with 30 Mbps speed under Retail plans.

Customers will get one-month free subscription or a free Wi-Fi router under ACT Basic plan for 6 months.