Telecom network vendor Alcatel-Lucent has moved closer to Huawei, the #1 player, in the GPON equipment market in the first quarter of 2014, said Infonetics Research.

The revenue difference between Alcatel-Lucent, the #2 GPON equipment vendor, and Huawei is around $1 million.

There are alarming signals for Huawei. For instance, China Telecom and China Unicom are slowing their FTTH investments to focus on LTE rollouts, while China Mobile picks up the slack, expanding the China Tietong fixed broadband network it inherited in 2008.

GPON equipment revenue increased 44 percent in the first quarter of 2014. Continued fiber-to-the-home spending in China and EMEA was the growth driver. 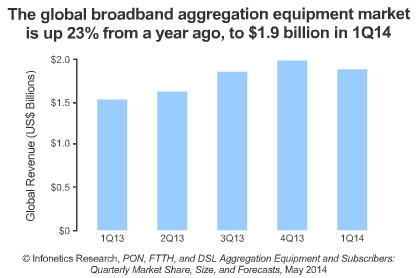 Jeff Heynen, principal analyst for broadband access and pay TV at Infonetics Research, said: “AT&T, CenturyLink, Windstream, and tier 3 operators all have dedicated plans in place to expand their VDSL and GPON deployments in an effort to keep pace with cable DOCSIS 3.0 rollouts and fiber offerings from upstarts like Google.”

PON market size rose 0.1 percent sequentially. PON is the only broadband equipment to show sequential growth in first quarter of 2014.

Despite a slow first quarter in 2014, EMEA continues to reap major vectored VDSL2 projects at KPN, Belgacom, Turk Telecom, and Deutsche Telekom, among others, and see a ramp in FTTH spending in Russia and the Middle East