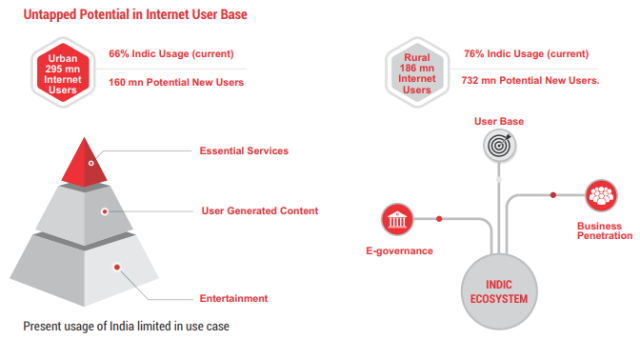 India can add an additional 205 million internet users if Internet is provided in a language of their choice, according to the Internet and Mobile Association of India (IAMAI) & Kantar IMRB.

A relatively higher proportion of Indic content consumption can be observed in Rural India (76 percent) while in Urban India over 66 percent of the internet users access internet in Indic.

Indic content consumption is higher in socio-economically weaker sections, as is evident from the fact that both in Urban and Rural India, SEC D/E have around 80 percent users accessing Indic content.

China has managed to achieve the highest number of internet users by using Mandarin script for internet content. Chinese is the second most popular language on the internet after English. In contrast, Indic content accounts for 0.1 percent of the worldwide internet content.

India will have to develop an Indic internet ecosystem that will allow for more internet services to be offered in Indic, raise internet adoption and promote digital empowerment of the weaker section of India.