The size of the SP routers and carrier Ethernet market rose 9 percent year-over-year and 17 percent from the previous quarter to $3.5 billion in Q2 2014.

Cisco remains the #1 telecom network vendor in the market.

Cisco revenues were almost unchanged from the previous quarter but were down 4 percent year-over-year.

Alcatel-Lucent, Huawei and Juniper posted strong revenue growth on both a sequential and year-over-year basis. 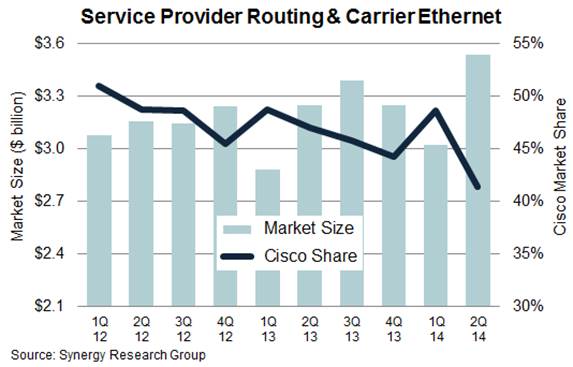 “While the overall trend in Cisco’s market share has been a steady decline, Q2 was surprisingly weak after a relatively strong first quarter” said Jeremy Duke, Synergy Research Group’s founder and Chief Analyst.

Cisco continues to do well in the largest segment, Ethernet services edge, but has been hit hard particularly in the core router and multi-services edge segments.