Reduction in gray-mobile handset market is due to an accelerated decrease in the sales of lower-end handsets known as feature phones.

These devices — counterfeit products like fake iPhones as well as white-box cellphones — have strong presence in India, Vietnam, Thailand, Pakistan, Indonesia and the Philippines.

The Middle East and Africa in 2012 surpassed Central and Latin America as the second-largest gray handset market, driven by increasing demand from countries such as Nigeria, Turkey, Egypt and Iran.

Gray-market handset shipments this year to the Middle East and Africa will decrease slightly to 38.2 million units. 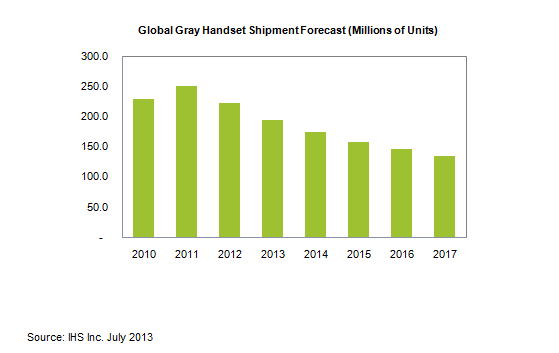 Central and Latin America together represented the third-largest gray-handset market, with 37.3 million units forecast to be shipped in 2013.

Countries in Eastern Europe, such as Russia and Ukraine, also are major target markets.

Globally, the gray market for cellphones will contract by 12 percent to 194.6 million units this year as both makers and buyers of these handsets turn to branded products.

Shipments reached their peak in 2011 with a total of 250.4 million gray-market cellphones.

While the ultra-low cost handset (ULCH) and smartphone segments of the gray market will continue to grow until 2014, expansion in these segments won’t be enough to counteract the drop in the feature phone sector.