Top 5 smartphone suppliers include Xiaomi, Samsung, Vivo, Realme and Oppo. Huawei does not feature in the top five positions in India. 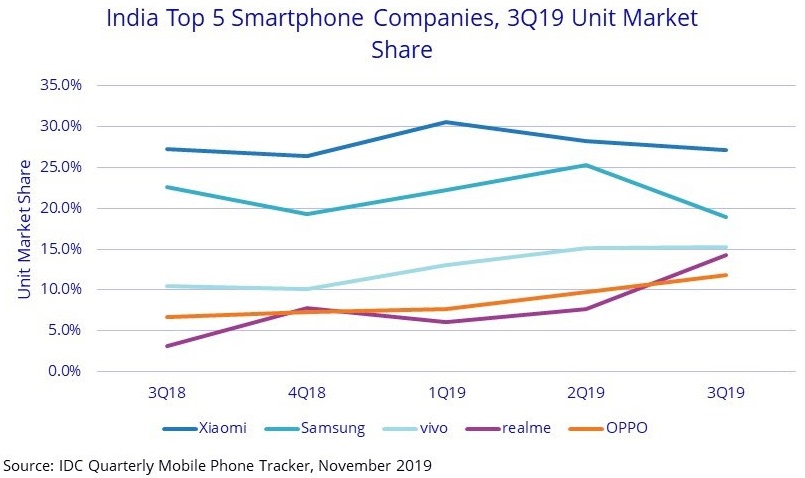 The growth in the Indian smartphone market was 26.5 percent quarter-over-quarter and 9.3 percent year-over-year.

The ASP rose 2.7 percent to $159 in the Indian smartphone market.

“The aggression by the online platforms with attractive cash-back and buyback offers as well as affordability schemes like No Cost EMIs and financing options were key in taking the share of the online channel to a record high of 45.4 percent,” said Upasana Joshi, associate research manager, Client Devices, IDC India.

Apple has dominated the premium ($500+) segment with a market share of 51.3 percent, on the back of affordability offers and price drops on previous generation models like the iPhone XR, iPhone 8 and iPhone 7 (128GB), along with the newly launched iPhone 11 and Pro series.

Xiaomi shipped 12.6 million (+8.5 percent) smartphones. The Redmi 7A and Redmi Note 7 Pro were the highest shipped models in the overall smartphone market. Xiaomi continued to lead in the online channel with a market share of 40 percent, with four out of the five top models from Xiaomi.

Samsung smartphone shipment dropped 8.5 percent. The lag between older Galaxy A series including Galaxy A10, 50, etc. and the refreshed Galaxy As including Galaxy A10s, A50s etc. series before the Diwali quarter led to this decline. The newly launched Galaxy M30s achieved strong shipments in its opening quarter.

Vivo has achieved 58.7 percent growth on the back of its affordable Y series including Y12, Y91/i). The newly-launched exclusive online Z/U series accounted for more than 20 percent of its overall shipments. Vivo is the third largest online vendor with a market share of 8.2 percent.

Realme has become the fourth largest smartphone brand, driven by shipments of affordable C2 model and its newly launched 5 and 3i series. Realme has online share of 26.5 percent vs 16.5 percent in the previous quarter.

Oppo slipped to the fifth position. Oppo A5s was the fifth-highest shipped model in the overall smartphone market in India. Oppo became the second largest vendor in the fast-growing $300-500 segment on the back of its newly launched Reno 2 series. 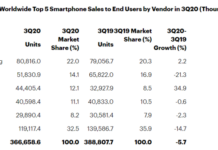 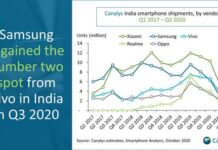