At present, Samsung is heavily promoting Galaxy S4 in India to retain its leading position in smartphone market.

“We are planning to start manufacturing of S4 soon at our Noida facility,” said Samsung Mobile and Digital Imaging Country Head Vineet Taneja. 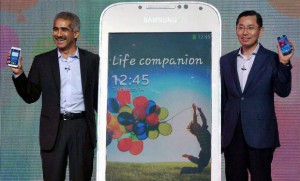 He, according to a PTI report, refused to share any time frame by when the production will start.

Samsung is planning to manufacture Galaxy S 4 in India at a time when the Korean electronics giant is facing shortage of the high end smartphones in the U.S. market.

Globally, Samsung had shipped 70.7 million smartphones in the first quarter of 2013 against Apple’s 37.4 million.

The company is also looking to double up the high-end smartphone (above Rs 20,000) market size in India, which is currently contributing around 10-12 per cent of the overall smartphone market.

IDC says the overall mobile phone market in India reached 218 million units in 2012, up 16 percent. Of this, 16.3 million units were smartphones that grew 48 percent.