TrendForce has released the latest ranking of the global top ten IC design companies based on their revenue in 2018. 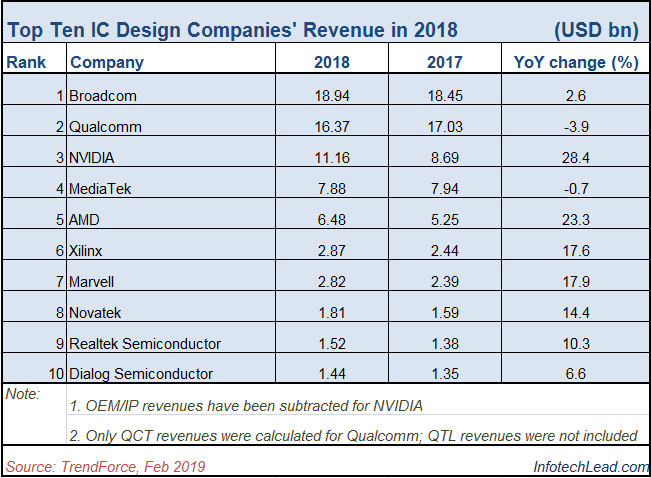 Broadcom, Qualcomm and NVIDIA are the top three IC design companies. MediaTek, AMD, Xilinx, Marvell, Marvell, Novatek, Realtek and Dialog are in the next position.

Qualcomm suffered the largest revenue decline – at 3.9 percent — due to weak demand from smartphone OEMs. Qualcomm lost Apple contract for supplying LTE Modems. Huawei, the other client of Qualcomm, is increasing its reliance on its own Kirin processors.

MediaTek’s revenue dipped 0.7 percent due to poor demand from smartphone OEMs. Dip in revenue at MediaTek was due to adjustment in its product portfolio and cost structure.

Eight IC design companies enjoyed a positive growth in annual revenue in 2018 mainly due to the result of the steady growth momentum in end markets such as telecom infrastructure, data center and TVs, Chia-Yang Yao, TrendForce’s senior industry analyst, said.

NVIDIA generates at least 50 percent of its revenue from games. But games revenue slid in last season. NVIDIA will not one or two seasons to clear gaming graphic card inventory and return to normal operating performances.

Chia-Yang Yao said the top ten IC design companies will be dragged down by factors, such as the decline in smartphone growth.

Huawei’s aggressive stance in the smartphone market will hit Qualcomm’s and MediaTek’s market performances in 2019.

Growth on the server will drop in 2019 mainly due to all the big CSP companies’ data centers coming into place, reducing their need for servers. 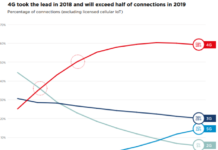