The latest Canalys report has revealed the share of Cisco, Dell EMC, HPE and Huawei in the combined server, storage and networking infrastructure market in the first quarter of 2019. 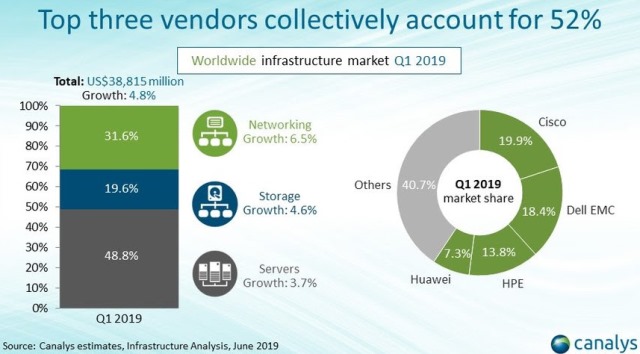 The global server, storage and networking infrastructure revenue rose 4.8 percent to $38.8 billion in Q1 2019 as compared with 16.3 percent increase in 2018.

The main factors include a slowdown in capital expenditure by the hyperscale cloud builders, weakness in service provider spending, the end of the mainframe refresh cycle, and smaller expansion in enterprise server and storage sales.

Cisco dominated each segment of the networking market. Dell EMC achieved gains in the channel in both servers and storage. HPE is the leading challenger in all segments, with its Aruba wireless LAN business taking further share. Huawei was the fourth largest vendor, accounting for 7.3 percent.