Cisco Visual Networking Index (VNI) is giving strong signals to telecoms to increase their Capex and focus on several aspects, in addition to capacity.

# Telecom operators need to fine tune their strategy to handle the unprecedented data traffic. Cisco said telecoms need enhanced security and intelligence to authenticate to gain access for devices — tablets, smartphones and M2M connections — to fixed/mobile networks. Increased bandwidth capacity is not the only requirement in the next half decade, said Cisco.

# The advanced video services (e.g., HD/ultra HD video, spherical video) and M2M applications will create new bandwidth and scalability requirements for telecoms. Residential, business and mobile consumers will demand for advanced video services across all network and device types. Since the quality, convenience, and price will be the key factors for success, telecoms need to invest more in networks.

# Cisco said IP networks must be intelligent and flexible enough to support the constant introduction of new/updated applications for fixed and mobile networks. Many SPs are actively collaborating with application and content developers to differentiate their services. 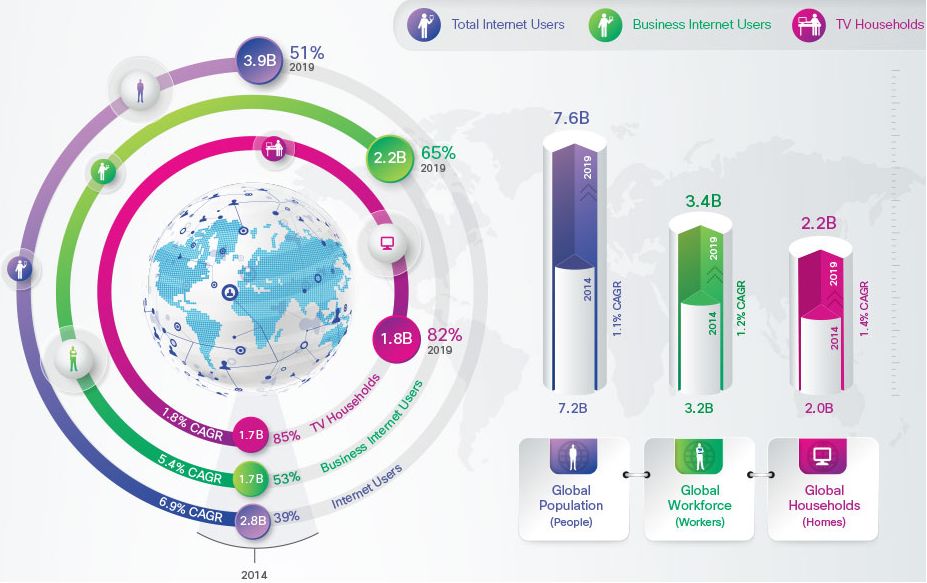 There will be 24 billion networked devices/connections online by 2019 against 14 billion in 2014 – including tablets, smartphones, and Internet-enabled ultra-high definition (UHD) TVs, as well as M2M connections and wearables including new smart watches, health monitors, etc.

Western Europe and Asia Pacific continue to lead the world in fixed broadband network speeds. By 2019, 33 percent of all global fixed broadband connections will be faster than 25 Mbps against 29 percent today.

IP video will account for 80 percent of all IP traffic by 2019 against 67 percent in 2014 – fuelled by demand by residential, business and mobile consumers.

Wi-Fi and mobile connected devices will generate 67 percent of IP traffic by 2019 — Wi-Fi: 53 percent and cellular: 14 percent — compared with fixed traffic, which will account for 33 percent of overall traffic.

South Africa and Saudi Arabia will have the highest IP traffic growth rate with a 44 percent CAGR from 2014 to 2019. Following will be Indonesia (36 percent CAGR) and India (33 percent CAGR) over the forecast period.