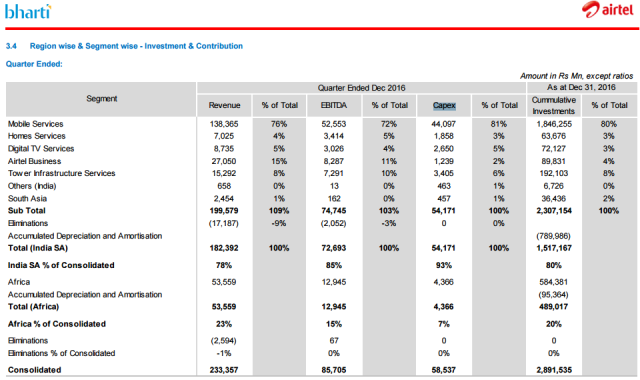 Airtel India has 265.9 million customers in December quarter of 2016 as compared to 243.3 million in the corresponding quarter last year, an increase of 9.3 percent. The churn has increased to 4.1 percent from 3.4 percent on account of competitive pressures.

Airtel India said minutes on network increased 13.7 percent, highest in last 21 quarters, to 330.2 billion from 290.5 billion. Voice realization per minute has dropped by 4.33 paisa to 29.42 paisa in the current quarter compared to 33.75 paisa in the corresponding quarter last year. This is largely due to the skewness towards incoming traffic related to the free offer by a new operator.

The competitive intensity due to the free offer by new operator has resulted in flat data customers at 54.9 million. The total MBs on the network has increased 28.3 percent to 171.8 billion MBs from 133.9 billion MBs.