Deutsche Telekom said its total Capex in 2020 will be €13 billion.

Deutsche Telekom will have a Capex of €4.2 billion in Germany, €6 billion in the United States, €1.7 billion in Europe and €0.4 billion for Systems Solutions business during the current year.

Deutsche Telekom’s US network team will cover 100 million POPs with 5G in 2.5 GHz by year-end and will double this again next year at least. 15 percent of the Sprint traffic is already on T-Mobile infrastructure. This will jump to well over 50 percent in 2021.

T-Mobile will realize €1.2 billion of synergies. Annual savings will double in 2021. T-Mobile improved its financial position in a series of refinancing transactions. Last week TMobile raised the EBITDA and free cash flow guidance.

Deutsche Telekom Germany covers 35.7 million lines with fiber of which 1.9 million are with gigabit connectivities.

Deutsche Telekom agreed a fiber wholesale deal with Telefonica Deutschland. “The agreement extends our contingent model approach for the next 10 years, and from VDSL to fiber-to-the-home. We agreed certain minimum build and Telefonica has committed minimum volumes,” Timotheus Hottges said during an analyst call last week.

The share of 5G devices has more than doubled to almost half of all new devices. 5G service is becoming increasingly relevant for our customers both on the B2C and on the B2B side.

T-Mobile will have over 270 million POPs with 5G service. T-Mobile is ahead of competition with regard to a network technology, and their 5G area cover is twice that of AT&T, and 3.5 times of Verizon. 5G in 2.5 gigahertz is already available to over 30 million people, and it will be available to 100 million by the end of this year. T-Mobile will cover 200 million in 2021.

Deutsche Telekom Netherlands already has 90 percent of the population covered with 5G services. Markets like Poland and Hungary are doing well.

“Deutsche Telekom is showing its strengths,” said CEO Tim Hottges. “We are raising our guidance thanks to strong business on both sides of the Atlantic. And we are able to do this despite feeling the effects of the pandemic in some areas.”

Telekom grew much faster between July and September than in the previous quarters, with 97,000 net broadband additions. Around 15.5 million lines in Telekom’s network are now fiber-optic-based (FTTH and FTTC/vectoring), 1.6 million more than a year ago. Almost 3.8 million customers use the television service MagentaTV, with 63,000 new users in the quarter and growth of 6.9 percent year-on-year.

Telekom won 192,000 new branded mobile contract customers. The company recorded a slight year-on-year decline of 0.5 percent in mobile service revenues, mainly due to lower roaming and visitor revenues on account of the reduction in travel as a consequence of the coronavirus pandemic.

T-Mobile passed the 100-million customer mark. 2 million net additions between July and September brought the total number of customers of the number two on the U.S. mobile market to 100.4 million.

T-Mobile Netherlands recorded 62,000 mobile contract net additions between July and September. Its adjusted EBITDA AL rose substantially by 6.8 percent to 141 million euros. Mobile service revenues recorded growth of 0.4 percent, despite the reduction in roaming revenues due to the pandemic. 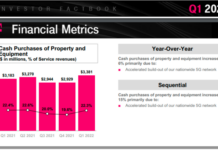