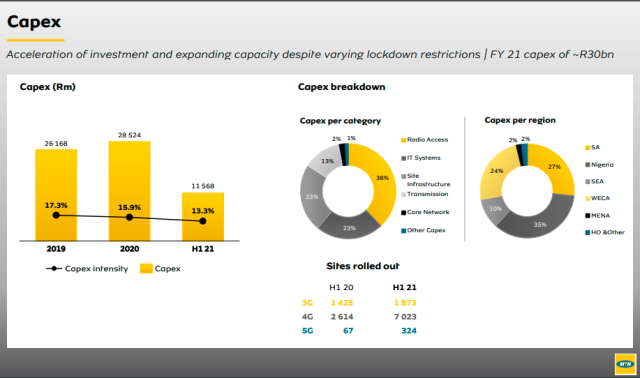 MTN has retained the 2021 Capex guidance of R30.1 billion for networks.

MTN continued to accelerate its investment and expand the capacity of networks despite COVID-19 lockdown restrictions. MTN rolled out 1,873 3G sites, 7,023 4G sites and 324 5G radio sites during the first half.

MTN South Africa has over 500 5G sites across several spectrum bands. MTN South Africa said it plans to significantly scale up should it be allocated 3500MHz high demand spectrum in the country.

MTN Group President and CEO Ralph Mupita said: “MTN delivered a solid H1, exceeding most of the Group’s medium-term targets through sustained commercial momentum as we executed on our Ambition 2025 strategy.”