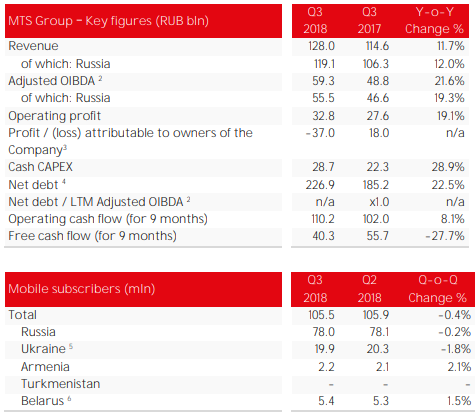 MTS quarterly revenue grew 11.7 percent to RUB 128 billion – fuelled by 12 percent rise in Russian telecom market revenue as well as increase in data consumption and digital service adoption across all the regions.

MTS posted net loss of RUB 37 billion because of RUB 55.8 billion reserved towards the liability with respect to the investigation being conducted by the U.S. Securities and Exchange Commission (SEC) and the U.S. Department of Justice (DOJ) in relation to its former operations in Uzbekistan.

MTS has deployed over 4,000 base stations in Russia dedicating more than half for the 4G network construction.

MTS has recently acquired a data center in Russia, which further strengthens our position in the fast growing cloud services market. We acquired a stake in Youdo, the leading Russian online marketplace, Alexey Kornya, chief executive officer of MTS, said.