Discussion on the possible strategic alliance may lead to merger or sale of equity in Tata Teleservices, Business Standard reported on Wednesday.

The combined Uninor-TTSL will be able to compete with Airtel, Reliance Jio, Reliance Communications, etc in both 3G and 4G areas.

Tata Teleservices has 3G spectrum for nine telecom circles. Uninor will be in a position to launch 4G / LTE in its six circles with the new spectrum it bought in November for Rs 4,018 crore.

The merger alliance is important for Telenor which is looking for a pan-India presence in the country. Since NTT Docomo, the joint venture partner in TTSL, is keen to exit from the Indian telecom business, getting the right partner is a top priority for the Tatas. The shareholding structure of the merged entity is not known.

Both TTSL and Uninor would together command 11.46 percent share of the mobile market in terms of subscriber base. This would help the two close in on the large gap they have with their rivals Idea Cellular (13.84 percent), Reliance Communications (13.92 percent) and BSNL (11.65 percent). It could also give Telenor a pan-Indian footprint. 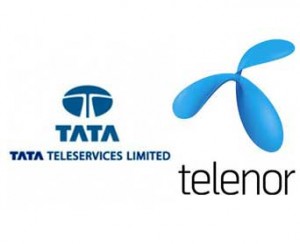 Telenor had 31.7 million mobile customers in six circles till February-end.

Tata Teleservices had 66.9 million subscribers. It has decided to return in 13 circles the spectrum it holds beyond 2.5 MHz.

In the past five years, the Tata group has put in equity capital of around Rs 3,250 crore in Tata Teleservices, the report said.

Docomo, according to the terms of its agreement, has the option to exit from TTSL by March 31, 2014. The Japanese company has hinted at divesting its stake. NTT Docomo paid Rs 13,070 crore for its stake in Tata Teleservices in 2009.

The ARPU of Tata Teleservices is Rs 136 compared with the industry average of Rs 140 a month. Unitech Wireless has an ARPU of Rs 97.

For the nine months ended December 2012, Tata Teleservices reported an operating loss of Rs 190 crore (operating loss margin of two per cent), compared with Rs 247 crore (margin of three per cent) in the same period the previous year.