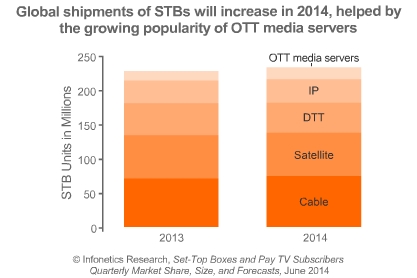 North America today commands the largest portion of STB revenue, but Asia Pacific is projected to close to within 3 percentage points by 2018, driven by a penetration of advanced services such as HD and OTT, which will set in motion an upgrade cycle.

Jeff Heynen, principal analyst for broadband access and pay TV at Infonetics Research, said: “A boost in overall STB unit shipments this year will come from an increase in over-the-top (OTT) media servers as service providers in China and other emerging markets use these devices to deliver live streaming TV.”