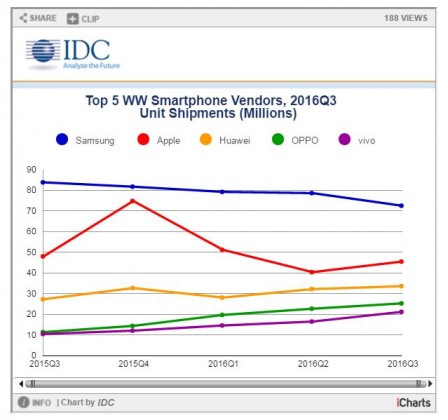 Despite the recall and negative publicity of Note 7 fiasco, Samsung continued the leadership mainly due to the success generated by Galaxy S7 and S7 edge, IDC said. Top five vendors remain unchanged – Apple, Huawei, Oppo and vivo followed the sequence in top 5.

Samsung’s shipment volumes were up 1.0 percent compared to 3Q15 when vendors shipped 359.3 million units. Sequentially, shipments grew 5.3 percent from 344.7 million in the second quarter of 2016. The figure excludes Galaxy Note 7 shipments for both recalled and unsold devices in 3Q16.

“Samsung’s market dominance in the third quarter was unchallenged in the short term even with this high-profile Galaxy Note 7 recall, but the longer term impact on the Samsung brand remains to be seen. If the first recall was a stumble for Samsung, the second recall of replacement devices face-planted the Note series,” said Melissa Chau, associate research director, Mobile Devices.

“With Samsung’s Note 7 finally laid to rest, both Samsung and other vendors will need to invest both time and money into properly testing devices to avoid a future incident of this proportion,” said Anthony Scarsella, research manager, Mobile Phones.

“The recall of the Note 7 represents an industry-wide wake-up call that will undoubtedly lead to a more vigorous testing and certification process moving forward,” the research agency notes.

“In a market that is otherwise maturing, Christmas has come early for vendors looking to capitalize with large-screened flagship alternatives like the Apple iPhone 7 Plus and Google Pixel,” Chau said. 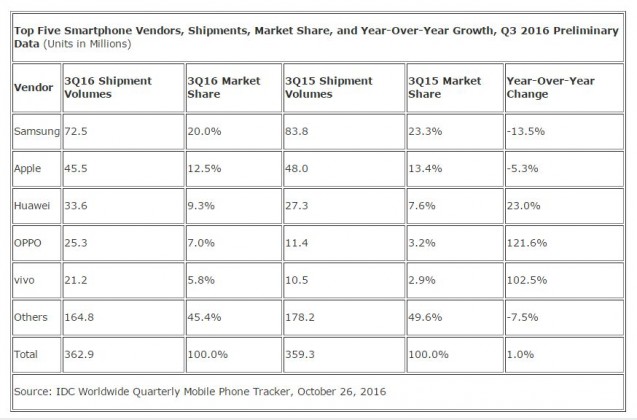 The new iPhone 7 and 7 Plus drove third quarter shipments of 45.5 million units for Apple, down 5.3 percent from the 48 million units last year. Higher than expected iPhone 7 Plus demand outstripped supply, which should be alleviated through the fourth quarter, helped by new features such as water resistance, faster processing, improved optics, and larger storage capacities, IDC said.

Phones like the OPPO R9 and the Vivo X7 have become serious competitors in China and are also witnessing mild success in Western Europe thanks to new athletic sponsorships across various countries. Whether or not these brands can make an impact in the U.S. market remains to be seen, but success will be crucial if aspirations of growth are a top priority, IDC said.

Huawei shipped 33.6 million units, up a notable 23 percent from last year. The current dual-camera P9 flagship continued to help with its momentum in China despite the higher price tag compared to some of its rivals. Huawei’s Honor brand also found success with the new V8, as the mid-tier device sold well both in and outside of its home country. Outside of China, shipments have grown drastically as China now represents 53 percent of shipments compared to 60 percent last year

In China, OPPO continued to do well largely due to its R9 device that saw continued success in the market and its domestic popularity helped it further close the gap to global number #3, Huawei. OPPO has also pursued an aggressive expansion strategy outside of China, with shipments to the rest of Asia/Pacific tripling since the same quarter a year ago. It particularly experienced good growth in India as it employed more staff to be positioned at storefronts to promote smartphones to consumers.

On its home turf, vivo plowed more investment into marketing in order to expand its reach via TV advertising, targeting high-tier all the way down to lower-tier cities in China. The aggressive promotion for its X7 series and strong coverage in the Tier 3 to Tier 5 cities helped it sustain the momentum. In India, vivo grew by increasing its marketing investments to expand its reach via television advertisements.