“Dozens of new LTE terminals are being launched every week with a growing share incorporating LTE-Advanced technology. The number of Category 4 devices rose 63 percent in the past 4 months, however the range of Category 6 devices quadrupled in the same period,” said Alan Hadden, VP of Research, GSA. 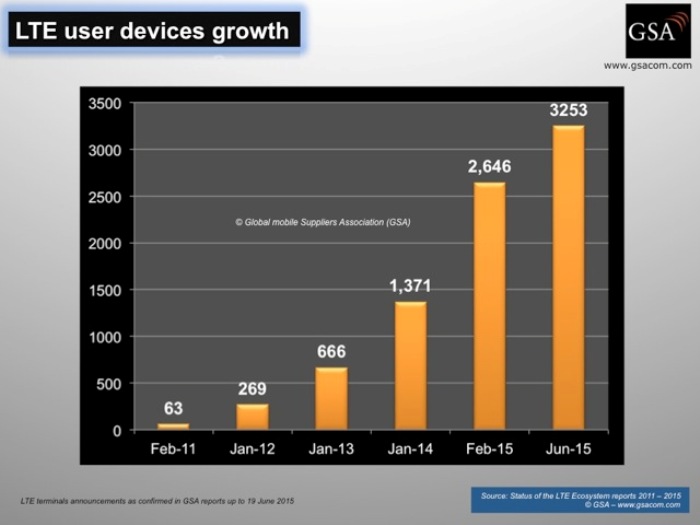 1,783 smartphones including operator and frequency variants are announced, giving an improved 54.8 percent share of all LTE device types. 98.5 percent of LTE smartphones are multimode, capable of operating on at least one 3G technology in addition to LTE and almost 44 percent of LTE phones can operate on 42 Mbps DC-HSPA+ networks. LTE tablets and personal hotspots are other fast-growing categories. 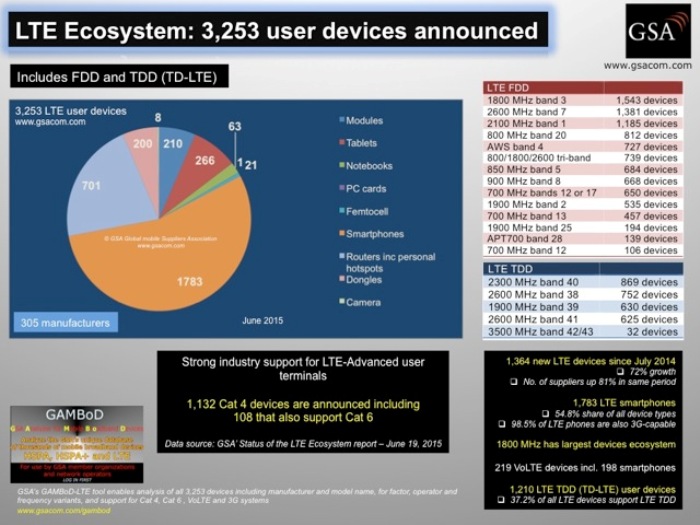 Adoption of the APT700 FDD band plan (698-806 MHz) by most countries across APAC and Latin America is a major opportunity for global spectrum harmonization for LTE systems, paving the way for ensuring the greatest economies of scale for devices addressing a market of approaching 4 billion people, for more capacity, and roaming. 139 APT700 band 28 devices: smartphones, tablets, CPEs and MiFis, are launched.

Initially operators are deploying VoLTE enabling HD voice for their LTE users. 219 VoLTE-capable devices (including carrier and frequency variants) including 198 smartphones have been announced by all the leading vendors including Apple, Asus, Fujitsu, HTC, Huawei, LG, Motorola, Pantech, Samsung, Sharp, and Sony Mobile.