Telecom network maker Ericsson has released a report – based on interviews with consumers – indicating that 5G is set to fix all issues of 4G consumers and provide more. 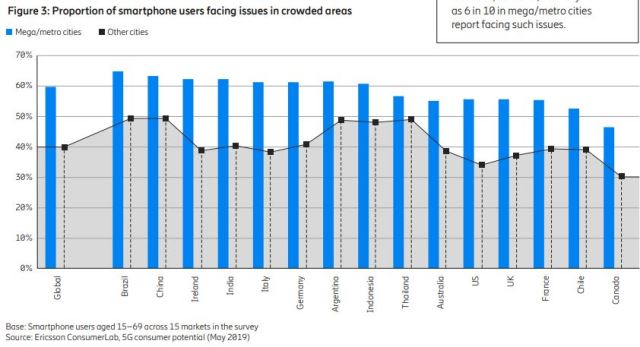 Half of smartphone users in South Korea and Australia, and two in five in the US, claim that mobile broadband speeds are not fast enough. 6 in 10 in mega/metro cities globally face most issues in crowded areas and would like 5G to be deployed first in such areas.

Consumers see value in 5G services and expect most use cases to go mainstream within 2 to 3 years of 5G’s launch – 67 percent say they are willing to pay for them.

Consumers in the US would prefer to cut the cord from cable TV and instead use streaming services via 5G; Chinese consumers expect to live in a 5G-connected smart home; and South Korean consumers would love to go shopping in mobile VR.

Smartphone users say they are willing to pay 20 percent premium for 5G, and early adopters as much as 32 percent. However, higher internet speed alone won’t be enough: 4 in 10 high-spenders expect new apps and services from their 5G plan.

Of those who have a recent iPhone model, 43 percent doubt whether the form factors and features of today’s smartphones can best take advantage of 5G.

4 in 10 expect foldable screens, holographic projection and 360-degree cameras as features on upcoming 5G devices. Globally half of all consumers agree that smartphones will still exist but that we will all be wearing augmented reality (AR) smart glasses in the next five years. 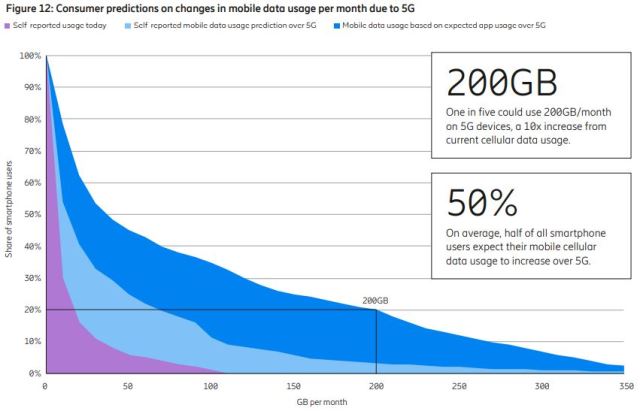 Three hours’ more video content will be consumed on mobile devices weekly when away from home, of which one hour will be on AR/VR glasses in a 5G future.

Half of all users expect their mobile cellular data usage to increase significantly on 5G, and 1 in 5 could see an increase of 10 times, with usage of 200GB per month.

For 6 in 10, 5G-connected home robots will be a status symbol, while 4 in 10 expect access to 5G in the car to be as important as fuel efficiency and engine power in the next 5 years.

The Ericsson survey found that the markets with highest consumer awareness of 5G and its promises were, in order, China, South Korea, the US, Italy and the Kingdom of Saudi Arabia.

While commercial 5G launches are kicking off in the US, South Korea and Switzerland, consumers in markets like the UK, Canada, Italy, Brazil and Finland expect 5G to be available in their market within 1.5 years from now.

Meanwhile, consumers in Ireland, France and Germany expect networks to be available any time between mid- and late 2021.

4 in 10 consumers say expectations around consistent 4G speeds across different locations and times of day have not been met. Many of these inconsistency issues are due to network congestion in crowded areas of cities: 43 percent of consumers indicate that they face most issues with 4G in such areas.

Urban network congestion issues are most intense in megacities. 6 in 10 in the mega/metro cities face issues with 4G connectivity in crowded areas such as shopping streets, bus stations and concert and stadium venues. Ericsson said upgrading to 5G could bring rapid relief to consumers suffering from capacity constraints in their networks.

Matt Stagg, director of Media Strategy at EE, said that operators should use 5G to augment the 4G experience in areas where you potentially have challenges in 4G today, such as train stations, commuter hot spots, stadiums and festivals.”

Smartphone users are willing to pay a premium of 20 percent over and above what they pay today for the benefits of 5G. However, half of all early adopters who are familiar with 5G’s promises could pay as much as 32 percent more than they do today. These potential 5G early adopters constitute 25 percent of all smartphone users globally.

Average monthly cellular data usage for a smartphone user in North America is 8.6GB and is set to reach 50GB by the end of 2024.10 However, just 10 minutes of AR app usage each day could translate to 50GB per month/user.

With a 5G device, 1 in 5 could use 215GB of data per month in the US, while in South Korea this could reach 250GB, and around 140GB in the UK. Average usage of 200GB/month is possible if one were to assume current mobile cellular data usage and add mobile cellular data consumed when using 1 hour of 360-degree video, 1 hour of VR on the move, 1 hour using AR maps and 4 hours of video streaming in 4K a month.