Ofcom today revealed how it will release 5G airwaves through a spectrum auction to improve mobile broadband coverage across the UK.

BT/EE, Telefonica’s O2, Three and Vodafone are expected to bid for 5G spectrum. The auction will involve companies bidding for spectrum in two different frequency bands.

Ofcom is releasing 80 MHz of spectrum in the 700 MHz band, following a four-year program to clear the band of its existing uses for digital terrestrial TV and wireless microphones.

Ofcom is releasing 120 MHz of spectrum in 3.6-3.8 GHz band. These important airwaves are part of the primary band for 5G and capable of carrying lots of data-hungry connections in concentrated areas.

On 9 March, the Government announced it reached agreement with the four mobile network operators – BT/EE, Telefonica’s O2, Three and Vodafone – to set up a Shared Rural Network to improve mobile coverage across the UK. This involves each company committing to deliver good-quality 4G coverage to at least 90 percent of the UK over six years.

BT/EE, Telefonica’s O2, Three and Vodafone have launched 5G in the last year and releasing these airwaves will help increase the capacity and quality of mobile data services.

Ofcom will be releasing the 5G spectrum in the following lots:

Ofcom will not include coverage obligations.

Ofcom is using an auction format known as simultaneous multiple round ascending (SMRA).

The 37 percent cap on overall spectrum holdings has the effect of restricting existing mobile companies to acquiring the following amounts:

Telefonica’s O2 will not be restricted by the cap due to its current spectrum holdings. 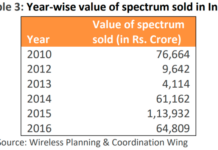 Why spectrum auction in March will not excite Indian telecoms?