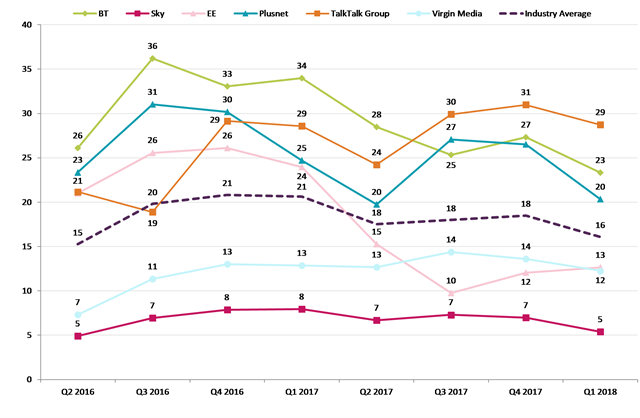 The above chart prepared by Ofcom indicates about the complaints of broadband users during the first quarter of 2018.

BT Group, Sky, Plusnet, TalkTalk, Virgin Media, among others, are the leading Internet companies in UK.

Ofcom says half of British households could switch to faster broadband today with the new measures that will be introduced in the second half of next year.

94 percent of UK homes and offices can now get superfast broadband, but less than half have taken it up, Ofcom figures show.

Ofcom says around 4 million households with basic broadband have passed their initial contract period and could switch to superfast for the same – or less – money.

Broadband companies – as well as mobile, landline and pay-TV providers – will have to alert customers about their best available deal, both when their deals are coming to an end, and every year after that if they don’t change their deal.

Ofcom will review pricing practices of broadband companies – in order to examine why some customers pay more than others, and whether these vulnerable customers need extra protections to get a good deal.

Broadband operators offer superfast broadband packages at around £20 a month. But while eight in ten broadband users are happy with their service, Ofcom wants to ensure the market works for everyone.

Customers can access BoostYourBroadband.com and check their options, decide what they need and get clear, independent advice on how to go about getting the best broadband deal for them.