The mobile DRAM revenue  rose 5.3 percent quarter-on-quarter to $8.435 billion in the first quarter of 2018, according to TrendForce. 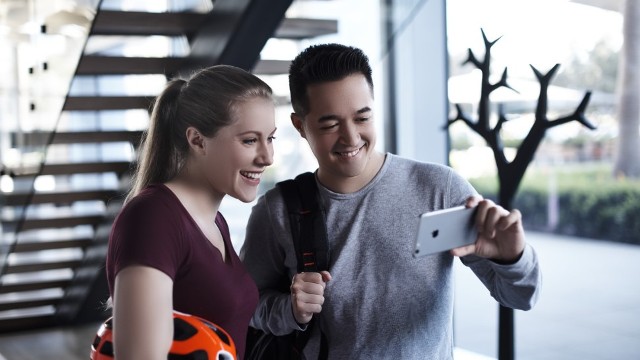 The report said price of mobile DRAM market will increase in Q2 2018. Huawei, Xiaomi, OPPO and Vivo, four major smartphone brands from China, will push the use of mobile DRAM.

Apple, the iPhone smartphone maker from the U.S., will raise the memory densities of iPhone models for 2018.

Android phone makers will also increase the memory densities of their phone models being released this year.

Samsung was the overall revenue leader in 1Q18. Samsung’s quoting has become more conservative during 1Q18 and 2Q18 compared with the prior quarters due to the investigation by China’s National Development and Reform Commission.

Samsung is the leader in the mobile DRAM market with $4.766 billion, as the company was successful in winning orders for high-density products. Samsung’s deployment of its 18nm process now extends to almost all of its mobile DRAM product lines. Samsung produces only a few LPDDR3 eMCP lines on the older 20nm process. 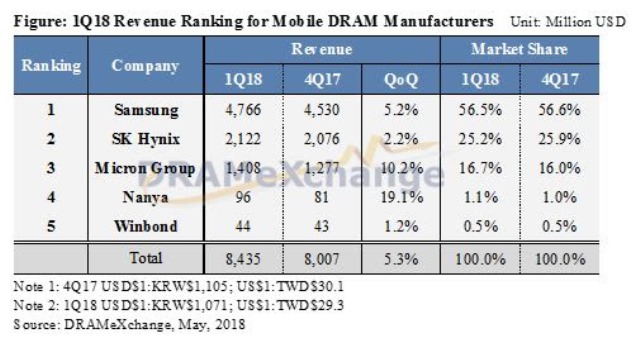 SK Hynix’s mobile DRAM revenue rose 2.2 percent to $2.122 billion despite the upswing in contract prices. The marginal growth was attributed to the issues with raising the yield rate and production capacity of the 18nm process, which is still at the initial stage of development.

SK Hynix could not increase its shipments of LPDDR4 components for smartphones because of the challenges with the 18nm. SK Hynix use the 21nm process and 25nm shrink process technologies for manufacturing LPDDR4 and LPDDR3 series, respectively.

The portion of 18nm products in SK Hynix’s mobile DRAM portfolio (including discrete and eMCP) is not expected to increase noticeably until 3Q18. The penetration rate of the 18nm technology in the manufacturing of the supplier’s mobile DRAM for the entire 2018 may be less than 10 percent.

Micron’s mainstream offerings for the mobile application will soon make the switch from the LPDDR3 series to the LPDDR4 series, which is projected to represent more than 50 percent of the supplier’s total mobile DRAM output (including the output of both subsidiaries) for the whole 2018.

Nanya’s mobile DRAM revenue rose 19.1 percent to $96 million. Nanya expanded shipments of its LPDDR3 4Gb chips because many independent design houses have selected discrete packages over eMCPs due to considerations over BOM (bill of materials) costs.