The recent analysis report in Reuters indicates that Apple will not be in a position to move out of China to produce majority of its iPhone smartphones. 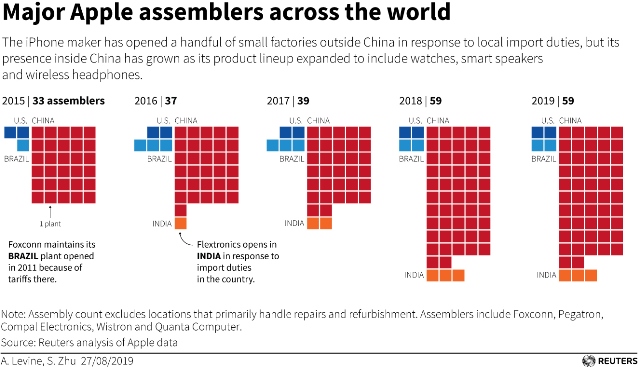 The US government’s tariff on $300 billion worth of Chinese imports will come into effect in two stages in September 1 and December 15.

Apple is looking for new manufacturing avenues to avoid crisis. Apple faces 15 percent tax on products made in China such as smartwatches and wireless headphones on Sept. 1 and on the iPhone, its biggest seller, from Dec. 15.

TrendForce said China will remain the major location for the manufacturing of Apple iPhones because Apple may face difficulties in relocation for the short-term. The new tariffs will impact Apple’s profits but chip away at Apple’s competitive edge in the smartphone market. Import duty on smartphones will be applicable from December 15 and the impact on iPhones will be limited this year.

Apple’s production volume of iPhones for Q3 2019 is forecast to reach about 42 million units, registering 10 percent drop. Apple will be launching three new iPhones during the third quarter ahead of the holiday season.

Apple has the option to tap smartphone factories in Brazil and India. But the success will be limited, Reuters report said. Contract factories owned by Foxconn, Pegatron, Wistron and others employ workers to assemble Apple devices.

Apple’s contract manufacturers have expanded into other countries. India has three assembly facilities, including a factory owned by Foxconn, which plans to make models from the iPhone X family of devices.

Apple taps the India operations to avoid steep import duties on iPhones in one of the last fast-growing mobile phone markets on the planet, similar to Apple and Foxconn’s move to open a production facility in Brazil in 2011.

The factories outside China are smaller. Apple uses phone making factories in India and Brazil to meet domestic demand.

Apple’s contract factories inside China have added far more locations than outside, with Foxconn alone expanding from 19 locations in 2015 to 29 in 2019 and Pegatron going from eight to 12, according to Apple’s data. The new locations come as Apple has added watches, smart speakers and wireless headphones to its product lineup.

Beyond the contract factories, the rest of Apple’s suppliers – the companies that sell it chips, glass, aluminum casings, cables, circuit boards and much more – became more concentrated in China. Among all supplier locations, 44.9% were in China in 2015, a proportion that rose to 47.6% by 2019, the data showed.

Apple faces hurdles in diversifying beyond China, where the clustering of multiple suppliers allows it to make millions of devices per year while holding a few days’ worth of inventory, which is critical to the free cash flow Apple investors prize.

Apple’s scale works against it because few other nations have workforces as large as China. Factories require highly skilled engineers to design and troubleshoot custom tools and processes. Vietnam, where Apple has manufactured accessories for years, has a population less than one-tenth the size of China.

Even if Apple can make devices in India or Vietnam, the volumes would be small compared with Apple’s overall needs.

Outside of China, there few places in the world that have the infrastructure to produce 600,000 phones a day, said Dave Evans, chief executive of San Francisco supply chain firm Fictiv.