China’s Semiconductor Manufacturing International (SMIC) is facing delays in getting U.S.-made equipment, parts and materials, after Washington imposed export restrictions against the firm.

SMIC, China’s largest contract chipmaker, has been among several Chinese tech firms including Huawei Technologies that have been targeted by the Donanld Trump Administration over national security issues.

In September, the U.S. Commerce Department’s Bureau of Industry and Security informed some firms that they need to obtain a license before supplying goods and services to SMIC due to because of “unacceptable risk” that such exports could be diverted to military end use. SMIC has said it has no relationship with the Chinese military.

SMIC said it is operating normally and hopes to be able to resume normal procurement, the Global Times said.

The chipmaker, as with competitors such as global market leader Taiwan Semiconductor Manufacturing (TSMC), relies heavily on equipment from suppliers based in the United States.

U.S.-based semiconductor equipment suppliers, including Applied Materials, Lam Research, and KLA, are expected to bear the brunt of the impact from the latest sanction against SMIC, research firm TrendForce said recently.

Qualcomm and Broadcom are SMIC’s two largest foreign customers. They have been using the 0.18µm node deployed at the Chinese foundry’s 8-inch wafer fabs to manufacture their PMICs.

Qualcomm and Broadcom are now requesting Taiwan-based foundries to take on additional wafer input because of the recent events.

SMIC earlier said it would set up a joint venture company to develop wafer production units in Beijing to enhance its semiconductor output and reduce costs.

The first phase of the project will have an estimated investment of $7.6 billion, with SMIC contributing about 51 percent of an initial registered capital of $5 billion.

The agreement comes as SMIC aims to build out foundries for manufacturing of computer chips that can compete with those operated by Taiwan Semiconductor Manufacturing (TSMC), the industry’s market leader.

The deal comes against a backdrop of tense Sino-U.S. relations as American restrictions on China’s Huawei Technologies threaten Huawei’s suppliers, which includes SMIC. 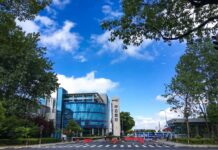 China on way to self reliance in 28-nm chips; to attain maturity in 14-mm category as well

China chipmaker SMIC to invest $2.35 bn in facilities in Shenzhen